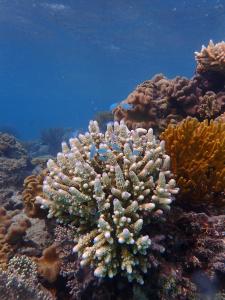 Most humans have experienced some social anxiety in their lifetime. While we generally attribute the enduring bonds of social familiarity to complex thinkers like humans, there is a growing body of evidence that we underestimate the importance of friendship networks in seemingly “simple” animals, like fish. , and their importance for survival in the wild. To better understand the impact of familiarity on social fish, a group of researchers investigated this idea using schools of coral reef fish.

“We studied how the presence of ‘friends’ versus ‘strangers’ affected the way fish responded to a predator threat,” said lead author Nadler. “The presence of ‘strangers’ seemed to distract the fish, causing them to react more slowly and greatly increasing the chances that they would become a hungry predator’s lunch when they were in the wrong social scene. “

Nadler and his colleagues believe their results boil down to confidence. In social animals living in the wild, individuals rely on their mates to alert them if a predator is hiding, but they must balance the risk of being eaten against the wasted energy of reacting to inaccurate information. Thus, individuals will change their sensitivity to social information depending on the level of familiarity in the group, and therefore confidence in the accuracy of the information.

“Trust between individuals is essential. This is true for humans as well as for many other species, including fish, ”Johansen said. “Our research on fish shows that when the transfer of accurate information fails, the chances of survival for the individual and the group as a whole are also reduced.”

Additionally, the researchers’ findings appeared to be driven by a combination of greater vigilance on the part of the first fish to detect the predator, as well as more efficient information sharing between neighboring fish.

“Our work shows that the willingness to react to a threat depends on who is around you, if you are a fish,” said Paolo Domenici, research director at the Institute of Biophysics of the Italian National Research Council. “If you are in an unfamiliar social environment, this is already something you need to be careful about. If you are surrounded by familiar individuals, then it will be easier for you to pay attention to any outside threats.

Since escape performance underpins survival against predator attacks, these findings help us understand why animals evolved to prefer associating with “friends” rather than “strangers”, by because of the implications for individual and group-level survival in nature.

“Friendship networks are important, both for humans and for less evolved taxa like fish,” said Mark McCormick of the ARC Center of Excellence for Coral Reef Studies. “The more you can count on your friends, the easier and more fulfilling your life will be. “

Get free virtual tutoring from the Bettendorf Public Library | Bettendorf