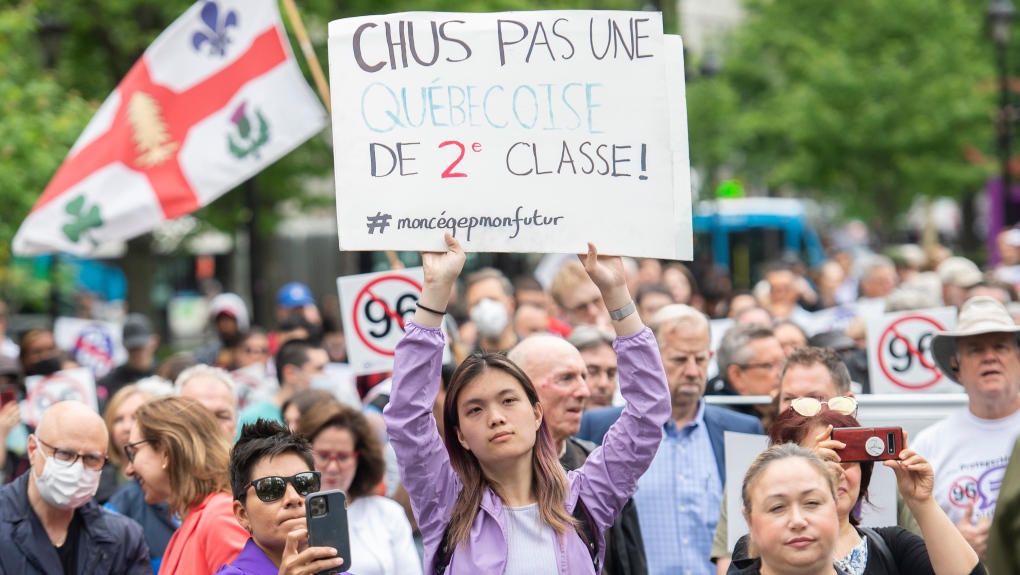 It’s no secret that Bill 96, Quebec’s new French language law, has created an abundance of unrest in the province – whether among English language rights groups, health professionals, education experts and many others.

Over the past few months, many experts have questioned the legality of the bill and wondered if there is a better way to protect the French language without upsetting other residents of the province.

Kathy Korakakis, president of the English Parents’ Committee Association (EPCA) laments that her organization, along with many others, has tried to reason with the provincial government, to no avail.

“We told them things, but they don’t listen,” she said. “When you table things like Bill 96, where it affects so many fundamental freedoms and rights, there are all these experts [willing to share their ideas.]”

She argues that politicians are not experts in education, health care or even language: “they are just popular people that people elected”.

“When you have real experts telling you, ‘Hey, this, that, and the other’ and you’re not listening, you have to figure out why,” Korakakis said. “There is another agenda there. It’s not about protecting the French language.”

Eva Ludvig, interim president of the Quebec Community Groups Network (QCGN), points out that all Quebecers recognize and agree that the French language must be protected – it simply must be done in a positive way “rather than through punishment and restriction” via public policy.

“They have everything upside down, upside down, in their attitude to language learning,” she said. “I understand the concerns of French-speaking Quebecers about maintaining and protecting their language. I know it’s vulnerable, it’s a minority language in North America, but it’s an important language — French is one of the first languages ​​in the world, not only in speech but in literature. “

She notes that the English-speaking community is actually the one that introduced French immersion classes in the early 1960s.

“Not because of strength, but because they recognized the importance of the French language,” she said. “It set the stage for schools to volunteer to introduce French before it became compulsory.”

Korakakis points to one way to improve the French language in Quebec: to strengthen it within the Anglophone community — again, in a positive way.

“The way you can do that is to reinforce French in primary and secondary,” she said. “From our point of view, our children are fine, but when we start saying ‘oh, you have to pass a biology or science course in French’, it’s a whole other thing.”

Korakakis admits there is always room for improvement when teaching French in English schools, such as opening up more spaces for immersion and bilingual classes.

However, a specific drawback stands in the way of this happening.

“Our schools are underfunded. When there are expansion projects, we don’t get the money; French schools get them,” she said. “With the [political] the environment they created is the opposite – no one wants to learn.”

Korakakis insists that many English-language schools promote Quebec culture, “where you listen to songs and music,” but that enthusiasm wanes once kids graduate and enter the workforce .

“When you look at the biggest employer, it’s the government, and 99.9% of the people who work there are only white francophones. It’s a problem,” she said. “This issue is so much more than just let’s get more culture classes.”

Ludvig adds that the government should put its money in its mouth and stop creating a division between francophones and non-francophones.

“Injecting money into the education system is extremely important; supporting small businesses…finding ways to provide language training to help small businesses,” she said. “You don’t learn a language in six months; they need to give time, recognition and positive reinforcement to newcomers and to understand the reality of newcomers to Quebec: it takes time to adapt, that’s normal; don’t blame them. “

For its part, the Government of Quebec insists on the fact that Bill 96 should not infringe a person’s right to receive, for example, adequate health care.

However, he remained vague on what that actually means.

Last month, the president of the College of Physicians of Quebec said in a very strong letter that the bill “sows confusion and concern, both among the public and among doctors and health professionals”.

In the letter, argues Dr. Mauril Gaudreault, “the text of the law, as worded, leaves gray areas and raises concerns about the options of future patients to converse in the language of their choice with the person providing them with care. “.

Chaos also reigned over how the bill might apply to educational institutions, with many questions over enrollment caps for English-language CEGEPs and additional French-language courses.

Following its Royal Assent, the English Montreal School Board (EMSB) filed an application with the Superior Court seeking a judicial review of Bill 96.

His main argument: the law violates the Canadian Constitution by infringing the right to equal access to the law in both official languages ​​of Canada.

The bill also gives new immigrants, including refugees, six months to master the language before using it for official purposes, with some exceptions for health care and justice.

In addition — and among many other amendments — the government recently admitted that birth, death and marriage certificates will henceforth only be issued in French.


WHO HAS THE POWER?

Ludvig insists that the Anglophone community has done its best over the past few years to extend an olive branch to the Coalition Avenir Québec (CAQ) government.

“Who has the power here? Whoever has the power is the one who will make the difference. The government people, the majority, I think they have to reach out,” she said, adding that Premier François Legault never called on members of the English-speaking community to discuss their input and their solutions to the linguistic debate. “Law 96 does so little to protect French. It targets English speakers, immigrants, isn’t it how to make French more attractive?”

Ludvig laments that as Bill 96 is slowly implemented in all facets of Quebec politics and society, “we’re going to see what a mess we’ve created.”

“The worst thing for me is the division it has created in Quebec society,” she said. “It marginalizes all minorities and it makes us feel like outsiders. It shows a lack of respect for the contributions of English speakers and their importance in the province.”

Korakakis says she hopes the next generation of leaders will see that the best way to protect and encourage the learning of French is not to take away rights from non-French speakers while curbing a French speaker’s ability to learn several languages.

Following the entry into force of Law 96, The QCGN created a poll to hear from people who have been directly affected by the new law.