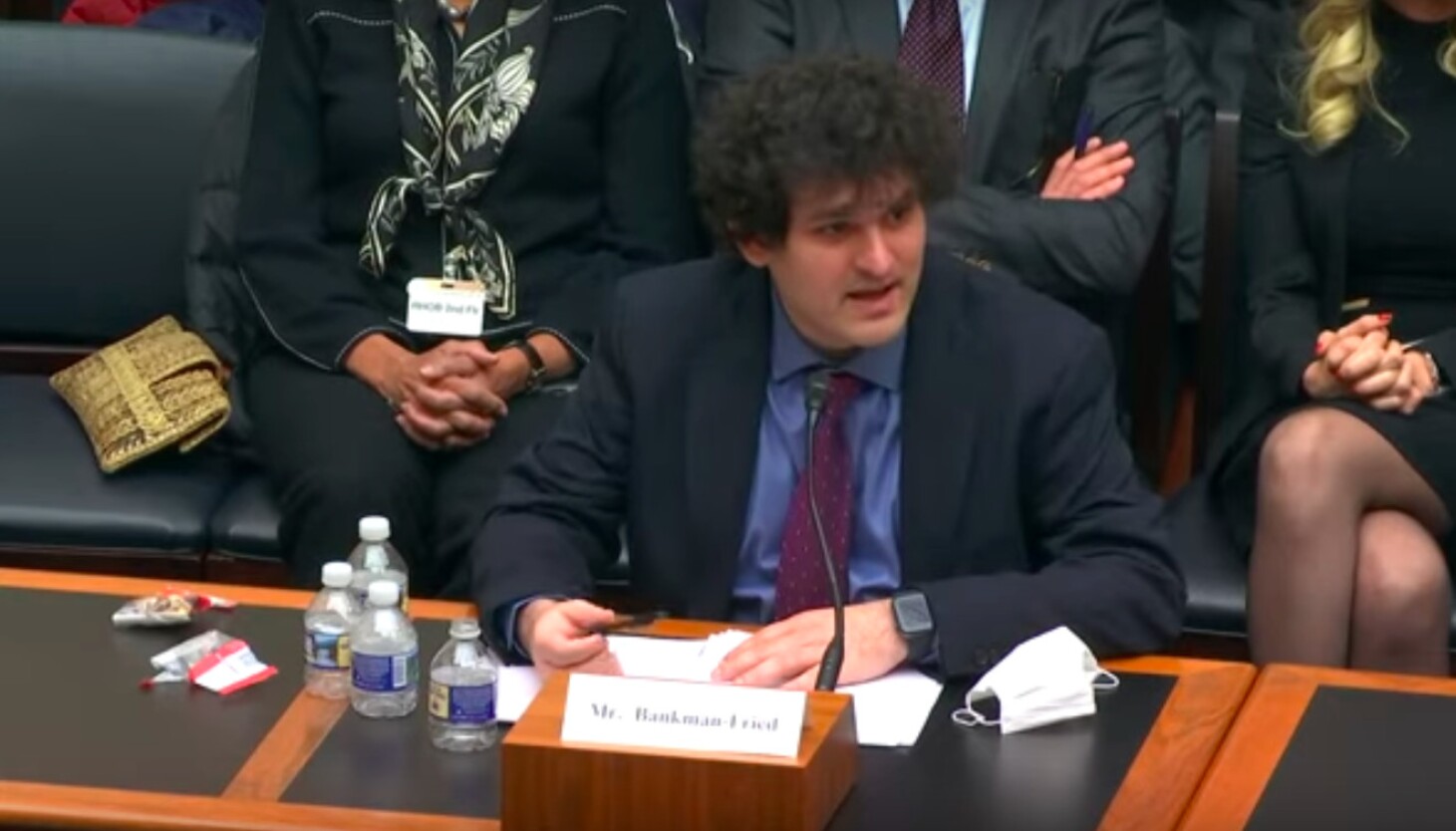 Protect Our Future spending is what the FEC calls “arm’s length spending,” the law prohibits the PAC from coordinating or communicating with a candidate’s campaign.

A Sun-Times review of this political spending found:

The PAC spent $151,420 on direct mail to support Rep. Jesus “Chuy” Garcia, D-Ill., even though he runs unopposed in the Democratic primary — and the little-known Republican on the ballot in the Safe Democratic neighborhood does not raise or spend money. For a PAC to jump into a race where a candidate has, for practical purposes, no real opposition is highly unusual.

Garcia told the Chicago Sun-Times on Sunday that Bankman-Fried called him about a week and a half ago to discuss one of his issues, pandemic preparedness. Garcia is a member of the Financial Services Committee, which regulates parts of the digital asset industry.

“These billionaires don’t want people like Delia and Jonathan in Washington,” Sanders said. “They don’t want it. We want them. They had the money. We have the power of the people. We can only beat the money if we are organized and work hard to get the vote out.

The 1st District primary is to replace incumbent Rep. Bobby Rush, D-Ill., and the rarely open seat has 17 Democrats on the ballot. The winner of the June 28 primary in this heavily Democratic district will likely win the seat in November.

According to TV ad buy tracking data shared with the Sun-Times, Protect Our Future spots for Jackson are airing on cable channels through Election Day.

The purpose of PAC, a spokesperson said, is to encourage pandemic prevention. Michael Sadowsky, the president of Protect Our Future, said in a statement to the Sun-Times that the PAC “is proud” to support Jackson, Garcia and Budzinski “because all three will be champions of pandemic prevention once elected to Congress.

Calls to Jackson for comment have yet to be returned.

THE BANKMAN-FRIED FILE: Bankman-Fried is the founder and CEO of FTX, an international cryptocurrency exchange based in Nassau, the capital of the Bahamas.

The FTX USA – FTX US – operation is headquartered in Chicago’s West Loop.

Bankman-Fried has emerged as one of the top mega-donors in the 2022 cycle, according to Open Secrets, the campaign watchdog group. Open Secrets reported on June 6 that FTX, “led by billionaire investor Sam Bankman-Fried, has positioned itself as a leader in the battle for influence.”

BANKMAN-FRIED GAVE $23 MILLION TO HIS SUPER PAC: The $500,065 to boost Jackson comes from Protect Our Future, a new political action committee that can receive unlimited contributions from individuals. FEC records show the PAC reported $24,156,970 in revenue, $23 million of which came from Bankman-Fried, whose address is listed in Nassau. Another FTX executive, Nishad Singh, also with an address in Nassau, donated $1 million.

BANKMAN-FRIED AGENDA – CRYPTO SETTLEMENT, PANDEMIC: The crypto industry, which is federally regulated, is experiencing tremendous growth and is under continuous congressional scrutiny. Over the past several months, Bankman-Fried has testified before House and Senate committees examining the regulation of digital assets. Bankman-Fried was a witness before the House Financial Services Committee on December 8, 2021, hearing titled “Digital Assets and the Future of Finance.”

Bankman-Fried is also a donor to a nonprofit group, Guarding Against Pandemics, led by his brother, Gabe Bankman-Fried.

DIGITAL ASSETS REGULATION ISSUE ON JACKSON’S WEBSITE: Of all the areas of concern in the 1st Congressional District, which sweeps across parts of the south and southwest sides, stretching out to near Kankakee – regulation of the digital asset industry has emerged as a top priority for Jackson.

This is the first issue on Jackson’s website where he calls for greater minority stakes in the crypto sector. Jackson even goes so far as to approve the regulatory framework in a specific bill – the “Digital Commodity Exchange Act”.

The second most prominent issue on Jackson’s site is one titled “pandemic preparedness.”

JACKSON AND GARCIA HAVE SIMILAR PANDEMIC PREPAREDNESS LANGUAGE ON WEBSITES: Jackson and Garcia have pandemic preparedness statements on their websites that share unusual language — each calling for “independent oversight of labs conducting dual-use research of concern.” Both approved of one very specific thing – removing some oversight power from the National Institutes of Health.

Budzinski has nothing on its website regarding crypto or pandemic policy. Bankman-Fried also donated $6 million to the majority House Democratic ally PAC. Winning Illinois 13 is a priority for House Democrats, and Budzinski is considered the strongest candidate in her primary.

JACKSON LINK TO FINANCIAL SERVICES PANEL: The Financial Services Committee is chaired by Waters, who is very close to the Jackson family, led by the Reverend Jesse Jackson. As I reported in February, Jackson, during his campaign kickoff, spoke about Waters, who knew Jonathan and his disgraced brother, the ex-Rep. Jesse Jackson, D-Ill., since they were kids. Former Rep. Jackson resigned from his seat under a cloud of investigation and went to jail for looting his campaign fund.

GARCIA TALKED TO BANKMAN-FRIED: Garcia noted when we spoke on Sunday that a candidate has no “choice” over independent spending. When I asked Garcia why the cryptocurrency billionaire backed him, he replied, “Because I’ve been outspoken about the pandemic ‘and how it’s affected Latino and minority communities'” disproportionately”. And I was also very vocal in the Financial Services Committee about the need for the United States – through its representatives in international financial institutions – to provide vaccines to the world.

Garcia, referring to Bankman-Fried, said, “I spoke with the guy. He told me he appreciated my support for this policy position, here at home and abroad. He called “about a week and a half or so ago”.

ON BANKMAN-FRIED PAC SUPPORTING NIKKI BUDZINSKI: In an open seat contest, Budzinski, of Springfield, is the frontrunner in the Democratic primary for the 13th District. The race is a priority for House Democrats, and November 13 could be competitive.

In April, Bankman-Fried contributed $6 million to the Democratic-allied House Majority PAC, whose goal is to keep the House under Democratic control.

Bankman-Fried also made a personal donation of $2,900 to Ald. Gil Villegas (36th), in a primary where his main rival is Ramirez. Villegas on his website calls for a “new regulatory framework” for cryptocurrency and blockchain technology.

JACKSON DOWN ON CAMPAIGN MONEY:The $500,065 in outside spending for Jackson is about as much or more than what separate major campaigns have raised. Jackson is trailing its main rivals in fundraising. Jackson loaned his campaign $50,000 in May.

The Protect Our Future ad buy is quite large, given the cash available from the top five rivals according to pre-primary reports filed with the FEC last week, covering contributions and expenses through June 8. .