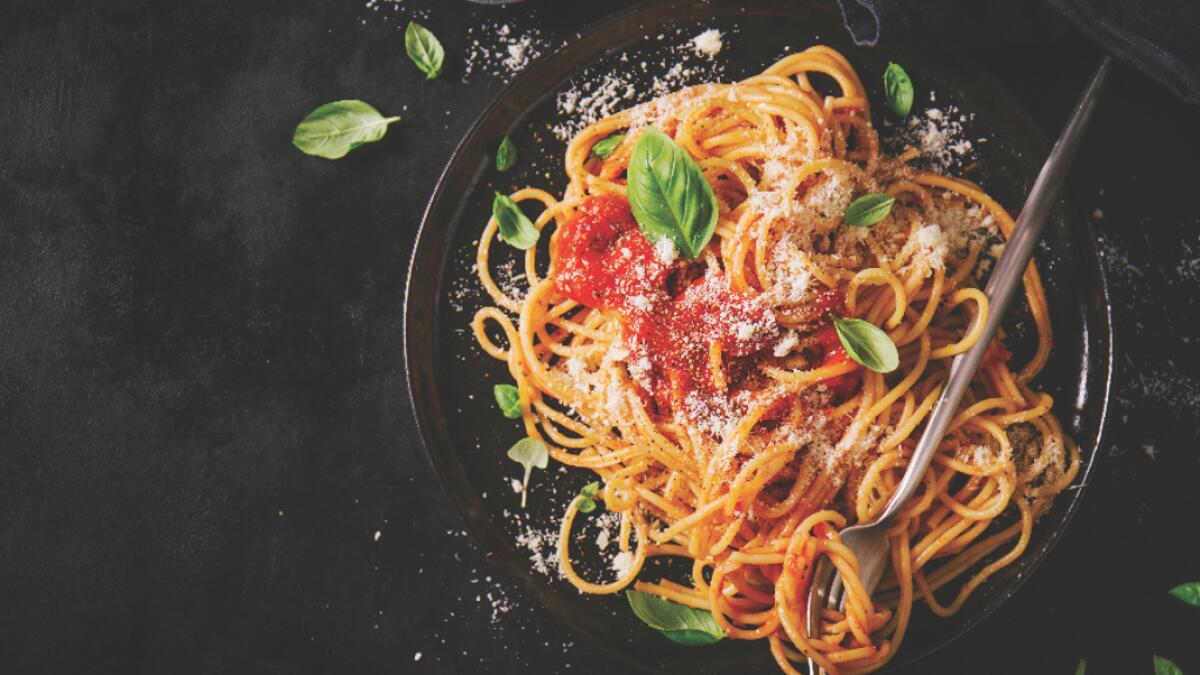 A gift from Sicily under Arab rule

Nothing is more classic Italian than a plate of spaghetti in tomato sauce sprinkled with parmesan cheese. It is the dish par excellence, especially in the eyes of foreigners who are unfamiliar with the finesse and rich regional variety of cucina italiana. Pasta is the culinary symbol par excellence of Italian identity. Eating pasta is the number one Italian experience anyone in the world can achieve with the availability of the right ingredients.

Italian cuisine begins with authentic ingredients, a feast of colors and tantalizing flavors that are based on recipes. Pasta can be fresh or dried, rolled or stuffed. There are over 350 types of pasta, and each shape is suitable for multiple recipes. Individual Italian cities and rural areas bring their typical pasta dishes. And each preparation has its story.

Pasta dishes entered Italian kitchens in the Middle Ages. But where and when exactly did the pasta industry start? The tradition of dry durum wheat pasta began in Sicily under Arab rule around 800 AD. The Arabs occupied Sicily in the 9th century – the Sicilians remained under Islamic rule for over 200 years until the Norman Conquest in the 11th century.

An extraordinary historical account proves the existence of a very active dry pasta industry in Trabia, Sicily, around 1150. The account comes to us from Muhammad al-Idrisi, a North African nobleman, traveler and geographer, who became an adviser to the Normans. King Roger II. al-Idrisi revealed the existence of a pasta industry in his Arabic book Tabula Rogeriana, which focused on territories all around the Mediterranean Sea. Writing about Trabia, a town just 30 km southeast of Palermo, al-Idrisi noted the presence of “perennial waters that move several mills” and farms where “lots of pasta” was produced. “It was the first pasta industry in history,” writes Massimo Montanari in A Short History of Spaghetti in Tomato Sauce, a book by Europa Editions that investigates the origins of pasta. “It was a real industry that controlled all phases of the production cycle: from harvesting and milling wheat to making and marketing pasta,” explains Montanari, professor of medieval history and history of nutrition at the University of Bologna. . “The cultural and political context of the time was extraordinarily open-minded and involved collaboration between Christians, Jews and Muslims,” he notes.

Sicily invented and revolutionized pasta. Italy’s beloved tradition of pasta-making has nothing to do with the history of Chinese noodles that have followed its paths. It was a widespread belief that Marco Polo had a role in the history of pasta. But that’s just a myth. Marco Polo only introduced noodles to Italy in 1296 when he returned from China to Venice. When Marco Polo returned, Italians had already been eating pasta for over 200 years!

Italian pasta culture stands on its own, but Middle Eastern cultures influenced where we started. “The search for origins takes us to the Fertile Crescent, the regions of the Middle East east of the Mediterranean,” says Montanari. “About 10-12 thousand years ago, the agricultural revolution began, and with it, the cultivation of wheat and its derivatives – foremost among which was bread, which became the symbol of this revolution.”

Pasta is originally a variant of unleavened bread, sometimes dried to improve preservation. “This thin dough, flattened with a rolling pin or worked by hand into elongated or other shapes, was called Lakhsha,” Montanari explains. “Another term, Rishta, indicated a type of pasta cut into strips or strings (like tagliatelle or spaghetti) before being dried,” he wrote.

The Greeks and Romans adopted the Middle Eastern practice of rolling dough. The Romans used the Latin word lagana, a dish similar to our lasagna. They fried or baked it without boiling the noodles in water first. “Perhaps Jewish merchants introduced the procedures for preparing dried pasta to western Mediterranean countries,” Montanari says. “Pietro Ispano, a physician who became pope in 1276, referred to dried pasta as ‘Jewish food’ (Cibus Iudaeorum).”

“But the Arabs spread the culinary custom of dry pasta to the regions they ruled – Sicily, North Africa and Andalusia,” Montanari insists. “Thanks to their mediation, the new practice superimposed itself on the Greek and Roman tradition of fresh pasta.”

Indeed, 12th century Sicily paved the way for the development of the pasta industry. And at the beginning of the 13th century, the Sicilians understood that the Sardinians were their first competitors in the production and export of pasta. A few decades later, Italian maritime cities such as Genoa, Pisa and Venice would establish pasta factories to develop a flourishing import-export trade.

During the Renaissance, Italy experienced a boom in the consumption of filled pasta such as tortellini, ravioli and agnolotti. All three combined the ancient Roman tradition of lagana – a dish similar to lasagna but cut into smaller pieces – with the skill of making savory pastries or pies in medieval times.

In the middle of the 16th century, Naples played a predominant role in the production of dry pasta, generally called macaroni. In 1576, the Arte dei Vermicellari, the corporation of pasta makers in the Kingdom of Naples, separated from the corporation of bakers to assume management autonomy, and vermicelli, long pasta slightly thicker than spaghetti, became the staple food. The Neapolitans were soon dubbed the macaroni eaters, much like the Sicilians of centuries earlier, with Sicily being the incubator of pasta or macaroni culture. “In 17th century Naples, macaroni would become the quintessential street food and pasta stalls would become places of entertainment for gentlemen visiting the city,” Montanari explains.

Villages overlooking the Gulf of Naples, such as Gragnano, still have the perfect climate for drying pasta, thanks to the Maestrale, a sea breeze blowing from Provence to the Mediterranean that mixes with the warm winds of Vesuvius.

The Italian pasta market remains the most concentrated market in the world. Italy is the leading producer of dry pasta, and Italians have the highest per capita consumption, with 23.5 kilograms per year, followed by Tunisia, 17 kilograms, and Venezuela, 12 kilograms.

So where does the word “spaghetti” come from? The Italian word “spago” means a thin string, and spaghetti is the plural of spago – a description of what spaghetti looks like. In the mid-15th century, Maestro Martino, a chef at the papal court, explained how to make Sicilian macaroni, sticks of dough as thin as a straw. “The ‘spago’ mentioned in the Sicilian macaroni recipe refers to the thread to pierce the dough,” Montanari explains.

However, people didn’t start using the term spaghetti until the mid-1800s. And today in Naples, the word maccheroni (macaroni) remains in common use to refer to spaghetti.

All Italian cookbooks, even earlier culinary literature, speak of pairing pasta perfectly with aged cheeses such as Parmigiano, Grana and Pecorino, whose dry nature is ideal for balancing the moist nature of its companion.

The fine grating of the cheese favors its amalgamation with the still boiling pasta.

For centuries, Italian pasta has been served plain with cheese. Butter and spices would enrich the cheese in recipes intended only for affluent tables. A mid-1300s short story from Boccaccio’s masterpiece, The Decameron, depicts fabulous Bengodi, an abundant food town where “they had a mountain of grated parmesan cheese, where people just made ravioli and gnocchi they were cooking. Then they threw them down, and the more you picked up, the more you got.”

Montanari points out that cheese on macaroni quickly entered the world of Italian proverbs to indicate an ideal combination. In contrast, macaroni without cheese has become the metaphor for imperfection.

The very first plate of pasta in olive oil was not made for aristocratic tables until the late 1600s by Antonio Latini. Dressing pasta with extra virgin olive oil only became “normal” in the 1950s, when the concept of the Mediterranean diet, known as the food pattern, took shape.

Olive oil has been a distinctive part of Mediterranean culture for millennia – the ancient Romans used it as both a condiment and a cosmetic. Yet later in the Middle Ages and the Renaissance, olive oil was expensive, a luxury only a few could afford.

In another register, the marriage between the pasta and the tomato sauce is fundamental, yet it didn’t happen right away. Even though the first tomato plants arrived from the New World around 1544, tomato sauce was quite welcome in Italian cuisine in the late 1700s.

When Goethe was in Naples in 1787, he observed that “macaroni is cooked simply in water and seasoned with grated cheese”. Only a few years later, in 1781, the Neapolitan chef Vincenzo Corrado wrote: “Tomatoes do much, with their acid juice, to aid digestion, especially during their summer season, during which, overcome by the heat, the stomach of man is relaxed and nauseous. .” In the early 1800s, making spaghetti with tomato sauce became a chef’s classic.

In her report, Il Ventre di Napoli (The Belly of Naples, 1884), the journalist and novelist Matilde Sarao writes: “All the streets of the four working-class neighborhoods have one of those taverns which have their cauldrons set up in the open air, where the macaroni are always boiling, the pots where the tomato sauce is bubbling, the mountains of grated cheese.

Italian businessman and writer Pellegrino Artusi spread the “Southern” custom of dressing pasta with tomato sauce throughout the country. In his famous cookbook Science in the Kitchen and the Art of Eating Well, published in 1891, he told how to make a good tomato sauce. Artusi was a businessman and writer who established a truly national Italian cuisine, and even the French cook Auguste Escoffier was inspired by him. Artusi is the father of Italian cuisine because he included recipes from all the different regions of Italy in one cookbook for the first time.

According to Artusi, the tomato sauce calls for a rich battero (chopped seasonings) consisting of a quarter onion, a clove of garlic, a rib of celery, a few basil leaves, enough parsley. Add the oil, salt and pepper to the mixture. Then cut seven or eight tomatoes into small pieces and put everything on the fire together.

Artusi poured tomato sauce over hot pasta dishes already seasoned with cheese and butter, as in the most established Italian tradition. In the 20th century, the roles were reversed: From now on, Parmesan cheese is added to tomato sauce.

Italian identity seems to live on in a simple plate of homemade spaghetti served al dente. The red of tomato sauce, the white of spaghetti and cheese and the green of basil leaves will always evoke the Italian flag.