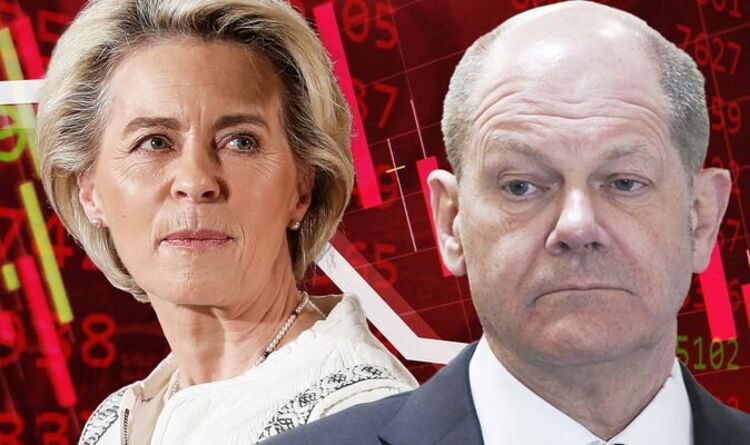 Economics and business expert Ambrose Evans-Pritchard said Germany faced a “nightmare scenario”. In a Telegraph article titled “The German economic miracle no longer exists”, he said that the German Council of Economic Experts had already cut its growth forecast for this year from 4.6% to just 1.8%. He warned he had ‘since begun to signal the dangers of a deep and lasting recession’

The expert also issued a warning to the European Central Bank, warning it that its policy of quantitative easing and keeping interest rates at “a historically low level” of -0.5% “seriously undermines the business model of German savings and cooperative banks”.

It comes as the war in Ukraine – and subsequent sanctions imposed on Russian businesses and oligarchs – have piled pressure on Western economies, with soaring energy costs triggering rising inflation.

However, Professor Thomas Mayer, former chief economist at Deutsche Bank, said the problems were there “even before the start of the war in Ukraine”, accusing the ECB of “using models that don’t work”.

He described Europe as being “completely locked down”.

“We were seeing echoes of the 1970s even before the war started in Ukraine.

“It succumbed to pure fiscal domination, much like the Banca d’Italia in the 1970s when it was forced to buy Italian government bonds.

“Southern Europe is now so deeply indebted – including France – that the ECB cannot raise rates. It is completely stuck.

“Of course everyone will blame Putin and claim that none of this could have been planned.”

According to the Federal Statistical Office, consumer prices jumped 7.6% over the year, a sharp rise from February’s 5.5%.

Earlier this week, Italy recorded an inflation rate of 7%, while France saw prices rise by 5.1%.

The data suggests that the euro zone will report inflation well above seven percent at the next reading.

But Professor Volker Weiland, a member of the German Council of Economic Experts, warned that “it could get worse”.

He said inflation could hit double digits, warning the latest shock could be tougher than the pandemic.