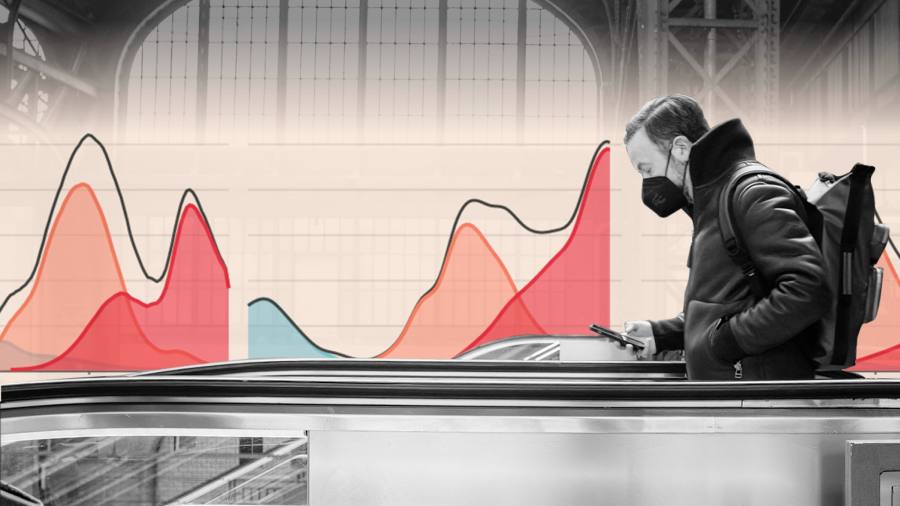 Less than two months after forecasting “a long period of tranquility” for Europe in the pandemic, the regional head of the World Health Organization warned this week that much of the continent was in the throes of a new Covid-19 surge after “brutally” sweeping away restrictions.

Hans Kluge’s about-face was spurred by the rapid spread of a highly infectious version of the Omicron coronavirus variant, known as BA.2. The strain has taken hold as people stop wearing masks and socialize more, causing infections to rise in at least 18 European countries, according to the WHO.

Experts predict North America will be hit by a similar resurgence in weeks, with some warnings that slow vaccination and booster shots among older age groups in the US could expose it to a bigger surge. hospitalizations than its European peers.

The Omicron subvariant is estimated to be around 30% more infectious than the original version, but analysis by the UK Health Security Agency shows that BA.2 cases are no more likely to lead to hospitalization than the strain Original Omicron.

“With boosters dwindling and restrictions easing, a second part of the Omicron wave was still likely, but BA.2 obviously exacerbated that,” said Dr Tom Peacock, a virologist at Imperial College London.

Despite the upsurge in infections, European countries have persisted in dropping restrictions.

“The way the UK and the rest of Europe are choosing to deal with this is that it’s not about cases anymore, it’s about hospitalizations and deaths,” Peacock said.

Hospitalizations have increased in countries with the most advanced BA.2 waves, but the share of cases requiring hospitalization remains much lower than for pre-Omicron variants such as Delta. This reduction in severe disease rates is in part due to the high levels of immunity in the Western world through vaccination and prior infection, as well as the inherently lower virulence of the subvariant.

From March 28, Poland will remove most of its remaining restrictions, including mandatory indoor masking and self-isolation for people living in households with people who test positive.

Italy’s government still plans to end the country’s state of emergency at the end of this month, more than two years after it was first introduced – despite infections nearly doubling since early March to 188 daily cases per 100 000 citizens.

Earlier this week, Germany ended most nationwide legal restrictions, including vaccine passport requirements for trains and workplaces, even as it faces a record number of cases . Scotland has also reduced its self-isolation and testing requirements, despite a record number of Covid-19 patients requiring hospital treatment, while England will end free mass testing from next month.

Only Austria chose to reimpose measures in response to the BA.2 wave, again requiring the use of high-quality masks in indoor public places from Wednesday.

“The feeling is that we’ve been through the worst of Omicron,” said Hajo Zeeb, professor of epidemiology at the University of Bremen. “The fear is less now that hospitals are overcrowded, but rather the problem of burnout by sick people at home.”

Zeeb said Germany faced a “greater threat” from BA.2 than its neighbors due to lower vaccination rates among older and vulnerable groups. Although the German parliament has abolished most legal measures, most German states have postponed the end of restrictions, such as the compulsory wearing of masks indoors, until the beginning of April.

Antoine Flahault, director of the University of Geneva’s Institute of Global Health, said France’s decision last week to lift mask mandates everywhere but health facilities and public transport was a mistake. The country was “not in a calm period” of the pandemic with infections at 100,000 a day and a seven-day incidence rate rising sharply to 928 per 100,000 people.

But Bruno Lina, a virologist in Lyon who advises the French government, said BA.2 did “not present a huge problem”. The country’s health service has the capacity to handle the surge, experts say, given that Covid-19 hospitalizations have been declining for six weeks.

The WHO’s Kluge said on Tuesday he was “optimistic but vigilant” about the trajectory of Covid-19 in Europe. The hope of many experts is that the summer will provide a respite from the high infection rates since Omicron emerged late last year.

“BA.2 is worrying because it is extremely contagious, but there are not enough people to infect and the hottest summer months are approaching, so we should be able to get back to normal,” said Anna Odone, health professor. public at the University of Pavia.

However, concerns about the rapid spread of BA.2 are growing among health experts in the United States, where federal and state authorities are lifting Covid-19 restrictions and vaccination rates are lagging behind many. European countries.

A third of Americans have still not received two doses of a Covid-19 vaccine and only 29% of the population has so far received a booster, according to data released by the Centers for Disease Control and Prevention.

“Our vaccine hesitancy and the speed at which we have managed to vaccinate and increase our high-risk population is lagging behind, and that is probably the main thing that makes us very vulnerable,” said Myoung Cha, president. and Chief Strategy Officer of Carbon Health. , a primary healthcare provider offering Covid-19 treatments and vaccines.

Anthony Fauci, Joe Biden’s chief medical adviser, said on Sunday he did not expect an “increase” in cases caused by BA.2 to demand the reinstatement of strict social distancing restrictions.

But Cha said authorities’ rapid removal of restrictions was worrying given BA.2’s rapid spread in Europe and the likelihood of it doing the same in the United States.

“I’m afraid it just adds fuel to the virus,” Cha said. “It’s the calm before another Covid storm in the United States, which will be worse than it should be due to short-term and hopeful thinking.”