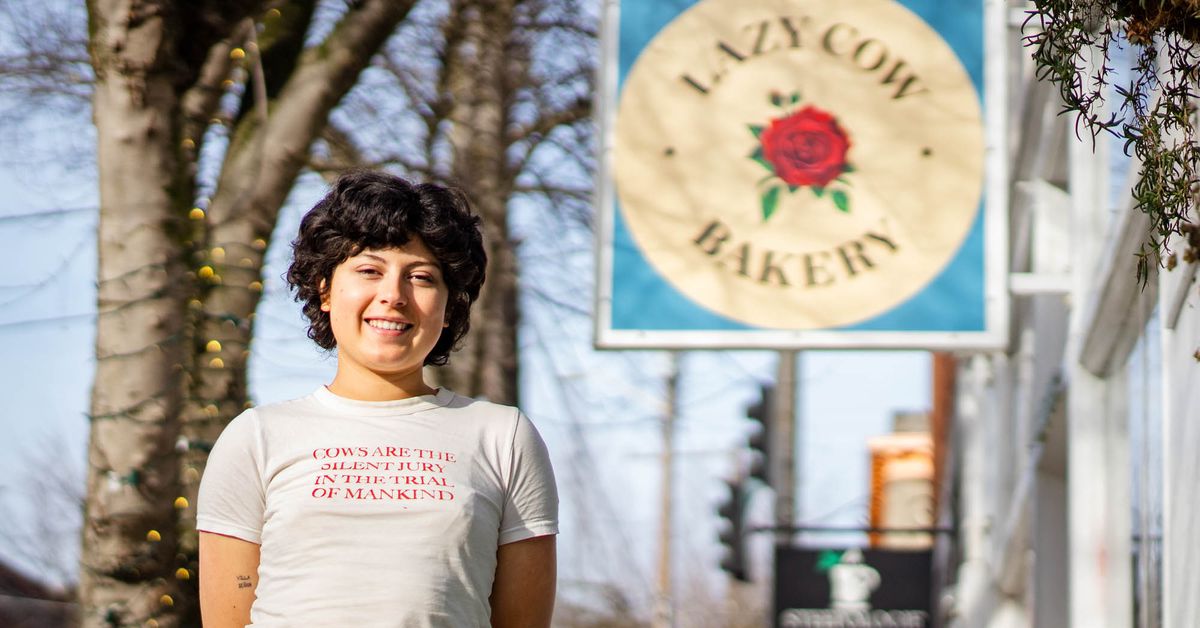 In the summer of 2020, Melanie Penney was walking through Fremont, her neighborhood of 10 years old, when she saw something unusual printed on a flyer. It was Xoloitzcuintle, the national dog of Mexico, announcing a new mutual aid organization, The Casa del Xoloitzcuintleand a vegan bakery, lazy cow. She took note. More than a year later, in October 2021, Lazy Cow opened on Fremont Avenue, and on its front door was a phone number, which Penney said was for a delivery person. But she texted the number and Lara de la Rosa, owner of Lazy Cow Bakery and La Casa del Xoloitzcuintle, quickly responded. For Penney, it was like kismet.

“She told me all about the concept and what she’s trying to build,” said Penney, who is Puerto Rican. “I was blown away. Since then I’ve shown up to do some painting, scrubbing the floor, doing bakery shifts. When I saw it was about the Latinx community, I really freaked out. said, wow, that’s something I miss.

After almost two years of planning, Lazy Cow Bakery has finally opened its doors, with an official launch party coming this month or early next. Partly vegan bakery (read the revolving menu here), part pantry and part community space, the space rooted in ideas of liberation – for animals as well as for humans. Currently, customers can have a Stamp Act coffee to accompany a slice of cake, a nopal cheese quiche or a lemon pie; there are preserves and donated goods in the Casa del Xoloitzcuintle pantry, though de la Rosa also hopes to provide hot meals.

De la Rosa is a self-taught baker and started Lazy Cow in her basement in the summer of 2020. She’s also a biochemist who worked in a lab until August 2021. She says the connection between biochemistry and pastry is simple: pastry is not just linked to science, it is scientific. “It’s very similar to the lab, in terms of doing experiments,” she says. “The difference is volume and speed. So, in the lab, you’ll be given an assignment and they’ll be like, ‘Oh, well, can you hand it over to me by the end of the year?’ But here it’s like, ‘We have to get this out in 15 minutes.’

Lazy Cow currently specializes in cakes and other pastries, but de la Rosa plans to add brunch service and host events — think movie nights, Spanish language learning groups and parties involving a disco ball. Everything is at the service of a vision that goes far beyond a simple slice of cake. Eventually, she hopes to attract more co-owners, provide health insurance for her employees and make decisions by consensus voting, a system where, she says, everyone’s opinion is taken into account.

The opening of Lazy Cow Bakery (and, by extension, La Casa del Xolo) has been repeatedly postponed due to delays in renovating the kitchen and obtaining the necessary licenses – de la Rosa signed the lease for the first time in May 2021. But she was undeterred. On the contrary, de la Rosa says she is used to suboptimal situations and is always ready to make the most of them. Penney, meanwhile, is equally happy to play a part in Lazy Cow’s mission — and its dance parties.

“I really want to learn more and engage in self-help,” she says. “I want to meet more members of the Latinx community and hear their ideas. The first bakery shift I did, [de la Rosa] had installed speakers and played music and we actually sold for the first time. It’s a place where I want to be.

Tokyo World: A taxi driver tried to overcharge passengers at a festival in Bristol