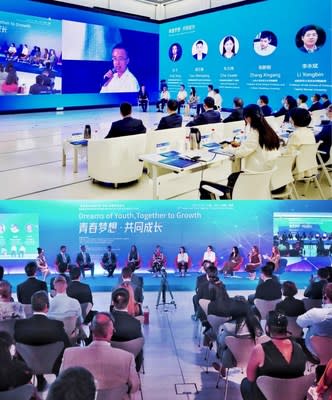 BEIJING, September 22, 2022 /PRNewswire/ — About September 20on the occasion of the 50th anniversary of the establishment of diplomatic relations between China and Greecethe China–Greece the event entitled “Youth Dreams, Together for Growth” within the framework of the Global Multicultural Youth Forum, jointly sponsored by Guohua Energy Investment Co., Ltd of China Energy Investment and the Center for International Cultural Communication of China International Communications Group (CICG) was held at beijing and Athens through a video link.

Honorable guests from government institutions and companies from China and Greece held a cloud-based dialogue via video link with Greek youth representatives from China-companies invested in GreeceChinese youth representatives from enterprises and universities, and people from various industries, including internet celebrities in Greece. All participants enjoyed warm and friendly exchanges on topics such as traditional friendship, history and culture, and business stories between the two countries.

The event took place around several topics in two locations. During the youth dialogue session, representatives from the Center for Green Energy and Architecture of Guohua Energy Investment Co, Ltd, Europe Renewable Energy and CNOOC Research Institute shared the development and practical application of the global green energy, as well as the transformation and upgrading achievements of China energy companies facing a new round of scientific and technological revolution and industrial transformation. The representatives of the Greek employees of the Banque de ChinaHuawei and ZTE shared their feelings on working in Chinese companies and their views on Chinese entrepreneurship.

Representatives of the Confucius Institute of the University of Thessaly, the Confucius Institute of Business in Athens and other institutions or companies discussed the history and culture of China and Greece as well as language learning with the professor of the School of History of the Normal University of the Capital, and the professor of the School of History and Culture of shandong University. The warm, lively and friendly dialogue has enabled the young people of the two countries to have better mutual understanding and closer friendship, conducive to exchanges between the two civilizations.

During the event, the Athens place and beijing sub-place also featured the traditional dances and musical instrument performances of China and Greece respectively, which vividly showed the charm and harmonization of the two ancient civilizations.