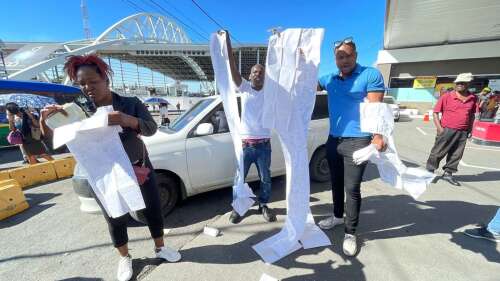 Protesting transport operators display printouts of their circulating traffic tickets which they claim have already been paid for.

Bus and taxi operators are to stay off the roads for a second straight day on Tuesday, following a government statement that fell short of industry calls for a ticket amnesty.

LILY: ‘We won’t back down’: Government tells striking transport operators to pay their fines

According to Newman, the release from the government is indicative of a posture towards the sector that is strict, inflexible and, in some cases, adversarial.

“We think the government is trying to show off its powers, as if the taxi and transport industry has no power,” Newman added.

In its statement, the government rebuked the protesters’ action, saying their efforts showed “complete disregard for the law”, and said it would not relent in its quest to create a better transport system for all. He also urged transport operators with unpaid tickets to pay their fines as stipulated.

Monday’s strike left thousands of passengers across the country stranded, while taxi drivers who did not want to take part in the strikes were beaten or had their cars damaged for failing to show solidarity with the protests.

While admitting there was disorder on the roads, Newman noted that that disorder extended beyond taxi and bus drivers who he said were being unfairly targeted.

“Is there a mess problem on the road alone? There is a serious disorder problem in Jamaica, even in Parliament. It’s not just on the road that we have a mess; we have cabinet mess down to the very bottom of the Jamaican population,” Newman said.

“So it’s not strange. We know, we admit. The government does not admit its evils but we admit ours. And yes there is disorder on the road, not just among taxi drivers but among motorists as a whole. And the government has to clean it up; put in the highway traffic law, add a public education program and let the law take its course,” Newman added.