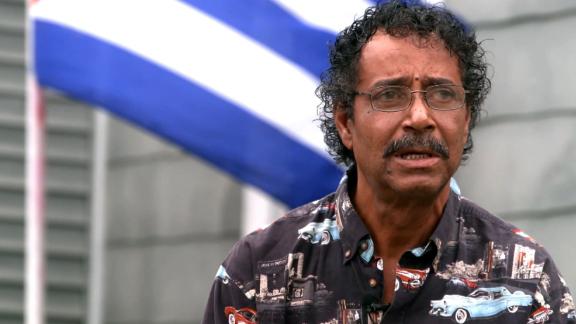 As the Afghans flee the Taliban regime and flock to the United States, they land in places like Fort McCoy, located in rural Wisconsin.

It is the current temporary home for up to 13,000 recently evacuated Afghan refugees, although military officials are not disclosing the actual number on the base.

Marcos Andres Hernandez Calderon lives in La Crosse, Wisconsin and knows their situation all too well and how difficult it will be for this generation of refugees.

Calderon was among thousands who came to the same Fort McCoy, fleeing Fidel Castro’s Cuba as a refugee over 40 years ago, arriving first by boat in South Florida.

The conditions of the 1980 Cuban refugee influx, otherwise known as the â€œMariel Boatlift,â€ were different from those thousands of Afghan refugees flee today. Named after the port of Mariel, west of Havana, these “Marielitos” left after Castro announced they could, in numbers that eventually grew to around 125,000, mostly making the trip to boat.

A number of them had been released from Cuban prisons and mental health facilities, creating an at times volatile population inside places like Fort McCoy at the time.

It is a situation that he and other Cubans like him in rural Wisconsin see as different from what is happening now.

“I don’t think they are going to fear as much as we are because they came to seek asylum because of the war that was going on there,” said Jose Lores, a 64-year-old former Cuban refugee who arrived in South Florida by boat in June 1980 before being taken to Fort McCoy. â€œThey know they are being persecuted and they [the Taliban] were going to kill them. They’re going to have to thank God for America because America is opening the door to receive them. “

“Just because you don’t know them, they’re a different race, they’re a different color, whatever. We’re all human, and we all deserve a second chance,” said Norberto Gomez Mendez, a 63-year-old Cuban refugee. “I believe here in America you open the door to the whole world, America is built from people who immigrate from all over the world.”

Based on their own experiences, these Cubans have some simple advice for this new generation of refugees.

“Learn the language. And find help … from the people who are willing to do it,” Calderon told CNN. “Because it’s very, very, very hard to come from another country where you can’t buy anything or ask people for direction or whatever because you can’t communicate.”

Apart from the language, learning the general rules of a completely foreign environment can be a difficult process.

“They are going to have to have someone with them who knows what the current situation is,” Gomez Mendez said.

â€œTo move, to move and to learn, they will have to be constantly guided. “

It’s advice that includes everything from getting a proper job and education to avoiding trouble with law enforcement.

â€œLearn the law of the land,â€ Lores said. “Why? We came from a country where we only knew one law, the law of the communist country. That’s all. When we came to America, we only really learned the law for years. late, and that’s one of the things that got us in trouble. “

The consequences of a mistake can last a lifetime.

According to the United States Citizenship and Immigration Services policy manual, crimes like murder or what he defines as an â€œaggravated crimeâ€ permanently prohibit someone from naturalizing.

In 1988, while Marcos Calderon was living in Minnesota, he reported that someone was selling cocaine in his home. â€œThey got me because the drugs were in my house,â€ Calderon said. He was eventually sentenced to federal prison, where he served a sentence of around three years and was released in 1992.

â€œEven today I am being punished for this crime, I cannot go home,â€ Calderon said, claiming he had served his sentence and decrying the current dynamic as unfair. “We are more American citizens than Cubans. We have the blood, we have the body, we have lived in this country for much longer. And we ask for a second chance, an opportunity, that someone help us, be able to have things, to travel, to vote. To be treated like an American, “Calderon said through tears, visibly shaken.

A violation of controlled substances qualifies for a temporary ban on applying for citizenship. Illicit trafficking of a controlled substance is considered an “aggravated felony,” which would generally result in a permanent ban, but any crime that fell into this category before 1990 is exempt, according to the USCIS policy manual. That said, the officer still has the discretion to consider the “seriousness of the underlying offense” as well as the “present moral character” of the applicant.

Without citizenship, Calderon and others in a similar situation must pay an annual fee of $ 410 to continually renew their authorization to be employed in the United States. It is a delicate web of government policies that these Cubans do not want the Afghans to face.

The Pentagon said on Friday that there were currently 25,600 Afghan evacuees housed at eight military facilities across the United States, including Fort McCoy.

With the influx of refugees, this has left some in surrounding Wisconsin with concerns, from politicians to members of the public.

“If we let some people go, it will create acts of terror that will poison the whole operation and that would be a travesty,” said US Senator Ron Johnson during a visit to Fort McCoy in late August, where he said about a thousand Afghans. were detained.

In nearby Sparta, Wisconsin, there is both concern and excitement about what the next steps might look like for these refugees.

“One of the things that concerns me is just the overall safety of … the citizens of our community, women and children in particular, there is just a huge cultural difference,” said Erica Culpitt, a 34-year-old Sparta. resident.

Michelle Hamilton, who has lived in Sparta for about 30 years, said: “It’s a little scary because we don’t know them, but at the same time, they are people. They are also scared.”

“I think we should help them because they are still human,” she added.

Many helped, donating clothes, shoes and whatever else they could, with the efforts spearheaded by Team Rubicon along with a coalition of other nonprofits.

â€œWe literally fly the plane as we build it, so every day is a constant iteration of how we receive, how we continue to do it better and more efficiently,â€ said Art delaCruz, CEO of Team Rubicon, at CNN. . “We have to make sure that we can provide these bases as they go along.”

For Cubans a generation ago, they remember the way they were treated and the tensions that resulted from being transplanted to a new country – a new world.

Marcos Calderon said, â€œBe yourself. Be ready. Learn the American way. Don’t make mistakes like many immigrants did. Do good to others. Show the United States of America that what they have done for them … it has been a good thing, and they are grateful to be here and to receive this help. “

Northern Manitoban nearly stranded after being airlifted to Winnipeg for surgery