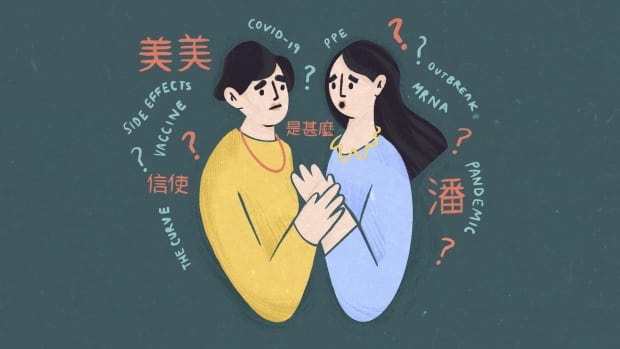 I feel like the biggest loser when someone says, “Wow, your English is so good! “

This first-person column is written by Rachel Phan, a second-generation Chinese-Canadian. For more information on CBC’s first-person stories, please visit the FAQ.

There’s this thing I do when I walk down the street with my partner. When someone crosses our path, I say something in perfect, crisp English, loud enough for that stranger to hear. I’m doing it to give myself just a little protection like to say, ‘Please don’t tell me anything racist. Look how well I played the game. I speak this language perfectly, without an accent – I swear to you, I’m one of you.

I learned this hypervigilance as a child, growing up in Kingsville, Ontario. – a small town about four hours south of Toronto. To survive my childhood as the only non-white student in my class, I did all I could to fit in. I brought Lunchables to school instead of mom’s braised pork belly and dad’s stir-fried morning glory. I stopped raising my hand in class for fear of being called the school “nerdy Asian”. I became tyrannical about spelling and grammar to show my fluency in the English language.

Now, as an adult, I know the truth: speaking perfect English will never really protect me from racism or micro-attacks. On the contrary, it took me away from what is most important to me: my parents, my ability to speak Cantonese, my culture.

My parents – who are ethnically Chinese, but were born and raised in Vietnam – were among the hundreds of thousands of “boat people” who fled after the Vietnam War. They arrived in Canada in 1981 and settled in a small town that was almost exclusively white. Mom and Dad were so keen to fit in and learn the language that they never made a fuss when my siblings and I answered their Cantonese in English. Eventually, they started talking to us mostly in English, although neither of them has the same fluency in the language as their three children.

At 33, I now barely speak our mother tongue – and it’s soul destroying. It’s like a million small sorrows when my parents call me “Rachel” instead of 美 美 (May May), my Chinese name.

I can no longer talk to my parents about anything meaningful or even life and death matters. When the COVID-19 vaccine rolled out in Canada, I often felt like I was screaming into the void because I didn’t have the words for “blood clots are rare” and “all vaccines are good vaccines. “.

How could I explain the effectiveness rates and the rarity of side effects when my Cantonese is limited to the most basic foods and phrases? When my parents called some vaccines “the good” and others “the [expletive] “I felt like my hands and my tongue were both tied. (Fortunately, mom and dad have since been fully vaccinated.)

My parents still live in a small town in southern Ontario – something that terrified me throughout the pandemic with reports of anti-Asian racism at record levels.

When I tried to explain to them that they had to be careful because older Asians were being spit on, hit and blamed for the pandemic, they seemed to think nothing about it. How could I give them a nuanced explanation of what anti-Asian racism is? I wondered if they would know what a racist insult meant if someone called them on the street.

But it’s not just life and death issues that make the loss of language so apparent and painful. These are my weekly phone conversations with mom, where she will say a word or phrase in Cantonese and we’ll discuss what she might mean.

“I don’t know how to say it in English,” she will say, frustration in her voice. I will start to guess, and more often than not, I am wrong. We often end the call without ever really being on the same page.

In times of lightness – when I allow myself to speak a minor and insignificant thing in Cantonese – my mother will stop and yell, “You are so cute when you speak Chinese!” But these moments are rare. My shame and insecurity constrain my tongue, making it even more impossible to speak a language that has an absurd amount of tones.

When I recently told my parents about the language barrier between us and how my inability to speak Cantonese makes them sad, they both said the same thing, “It’s our fault.

“I was supposed to send you to Chinese school, but there is no Chinese school here,” Dad explained. “The closest was in Toronto – so why would I be sad? It’s also my fault. Sometimes I wish we could speak Chinese together. It would be better. But it’s okay. I know the situation.”

Mom echoed her statement. “If I’m sad, what can I do? We have no choice. You were born in Canada and you speak English. It’s also my fault. If I spoke to you in Chinese more…”

His sentence fades and I fill in the gaps. My parents could have spoken to us in Cantonese, but they didn’t because they wanted everything to be “right”. They wanted to be good at the assimilation game – and they did. So why, then, do I feel like the biggest loser of them all every time someone says to me, “Wow, your English is so good”?

I realized over time that for some people, I will never be “Canadian” enough just because I am Chinese. This reality hits the hardest when a white person approaches me to say “Ni hao” (Mandarin) or “Konnichiwa” (Japanese) or to ask me where I am. really of. For them, I couldn’t be Canadian. I must come from somewhere else – just another exotic stranger.

To make matters worse, I’m also concerned that my loss of language will somehow make me less Chinese than my peers who can speak Cantonese fluently.

But when I asked my parents, they both responded without wasting any time. “No, you are still Chinese.”

Their words are like the most calming of balms. For a brief moment, the gap between us seems smaller, and I feel fully, proudly Chinese, just like them.

Do you have a compelling personal story that can bring understanding or help others? We want to hear from you. Here is more information on how to introduce ourselves.

Portuguese TV star, known for quarreling with immigrants, wants to run for mayor