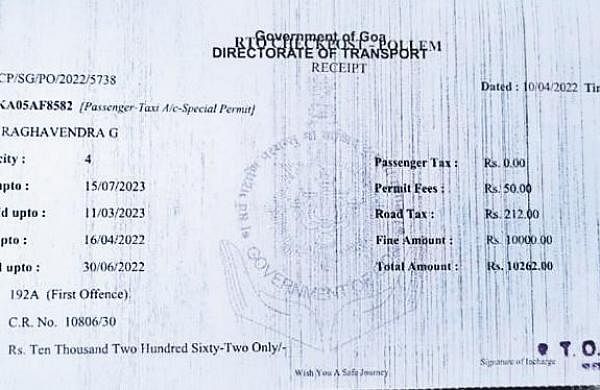 BENGALURU: Tourists from Karnataka, who took taxis to Goa, were forced to pay a fine and penalty of Rs 10,262 per vehicle to obtain a special permit to cross the border. Taxi drivers were unable to obtain these permits as the State Transport Authority in Bengaluru and RTOs in other districts were closed for four days from Thursday due to holidays and the state has no opportunity to put them online.

More than 40 taxis have been stranded at the Mollem checkpoint in Goa since Thursday, M Ravi, deputy chairman of the Karnataka Tourism Forum, told the New Sunday Express on Saturday. Normally, the special permit costs Rs 100 or Rs 200 and it is paid at the RTO office at Shanthinagar in Bengaluru and other RTOs in other parts of the state. Many taxi drivers had gone to the Goa border thinking they could get the permits at the checkpoint as the service was available until recently. But he has been arrested since April 1, he said.

“While Andhra Pradesh and Kerala issue special permits online, Karnataka has not yet given this option. Tourists are forced to pay huge sums as fine and penalty to enter Goa. taxi from our own Arjun Tours and Travels had to pay Rs 10,262. For bigger vehicles, like vans, the fine was Rs 17,000 while tourist buses had to spit Rs 25,000,” he said. he declares.

What will happen if Russia defaults on its debt?

AI masters language. Should we trust what he says?