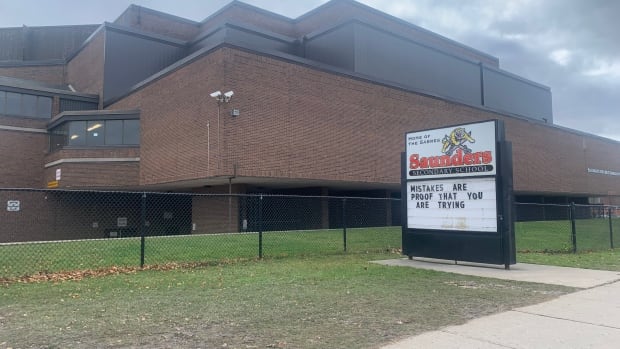 A teacher at a secondary school in London, Ont., Has not returned to class since using the N word while reading song lyrics during an English class on metaphors and allusions to the last week.

Saunders High School students say teacher read Black Eyed Peas song Where is the love? which has the N word in one of the verses.

“Instead of skipping it or discussing it with the class, she just said it blatantly, like it was a normal word,” said Kayla Derbyshire, 16, a pupil of the grade 12 English class in which the word was mentioned.

“One of the students got quite upset and told her that what she said was wrong and that it couldn’t be said because obviously that’s a word we shouldn’t say, especially in a school setting where it might offend people. ”

Dissatisfied with the teacher’s response, who suggested the student was overreacting, the student reported the teacher to administrators, Derbyshire said.

“You can’t just throw that word out and hope nobody gets mad or says nothing about it,” Derbyshire said. “I’m very surprised because I thought, of all the people that a teacher wouldn’t have said it and just skipped the word and left it there.”

The well-being of students “a priority”

Students say the teacher has not returned to school since the incident on Tuesday, November 16.

CBC News is attempting to contact the teacher for comment before releasing this person’s name. At the time of publication, the teacher had not been reached.

I can’t be surprised. I am not shocked. It happens all the time– Alexandra Kane, Black Lives Matter London

Contacted by CBC News last week, the Thames Valley District School Board declined to say what discipline the teacher was facing. When questioned again on Monday, officials said the teacher had been “dismissed from his teaching duties” while an investigation was underway.

“I expect all staff to know that there is no valid reason to use racist words in a Thames Valley school,” said TVDSB Director of Education Mark Fisher, in a press release.

“The use of words that reflect a history of white colonialism, oppression and racism, even in the context of art or music deconstruction, can create traumatic emotional triggers for racialized students. The Thames Valley District School Board is committed to achieving equitable outcomes for all students. . ”

It can be difficult to stand up and speak out, especially against an authority figure such as a teacher, said Alexandra Kane, who speaks for Black Lives Matter London.

“I am proud of the strength and courage of these students who have come forward. It shows us that what we are doing is right,” Kane said.

But Kane said she wasn’t surprised another teacher used the N word in a classroom.

“I can’t be surprised. I’m not shocked. It happens all the time,” Kane said. “You can still do your lesson, you can still use the song, but don’t use the word. Drop it, leave it out. It’s left on the radio, it can be removed from your lesson. It doesn’t matter. to advance the plot. “

The incident comes less than a month after another teacher uttered the N word in a grade 8 English class during a discussion of Agatha Christie’s novel And then there was none.

In this incident, on October 27, a teacher at St. Kateri Catholic Elementary School opened up about the murder mystery, published in 1939, and warned that it contained language that was no longer in use, including word N, which she said in full.

A 13-year-old girl in that class, who identifies as black and is of Caribbean descent, was shocked at the use of the word and said some of her classmates were as well. Her mother complained at school.

It is not certain that this teacher faced the discipline. The principal said the teacher’s intention was to have a “frank discussion” about the impact of words and how the language changes over time.

School boards, as white-run institutions, need to find a way to remedy these cases and keep their employees at a higher standard, ”Kane said.

The TVDSB is in the process of developing “Guidelines on the Non-Use of Racial and Other Insults and Epithets” for educators, which should be distributed to all staff in the coming months.

“We have worked hard to develop a document to provide teachers with advice that makes it clear to everyone that racist language is never appropriate in school,” Fisher said. “As part of our ongoing commitment to professional learning, TVDSB staff participated in mandatory anti-racism training on November 12th.

Last week, a London teacher said the N word while discussing the novel And Then There Were None. London Morning reached out to Kearie Daniel, co-founder and board member of Parents of Black Children, to find out why some schools are still teaching an 80-year-old novel that uses that word in its text. 8:03