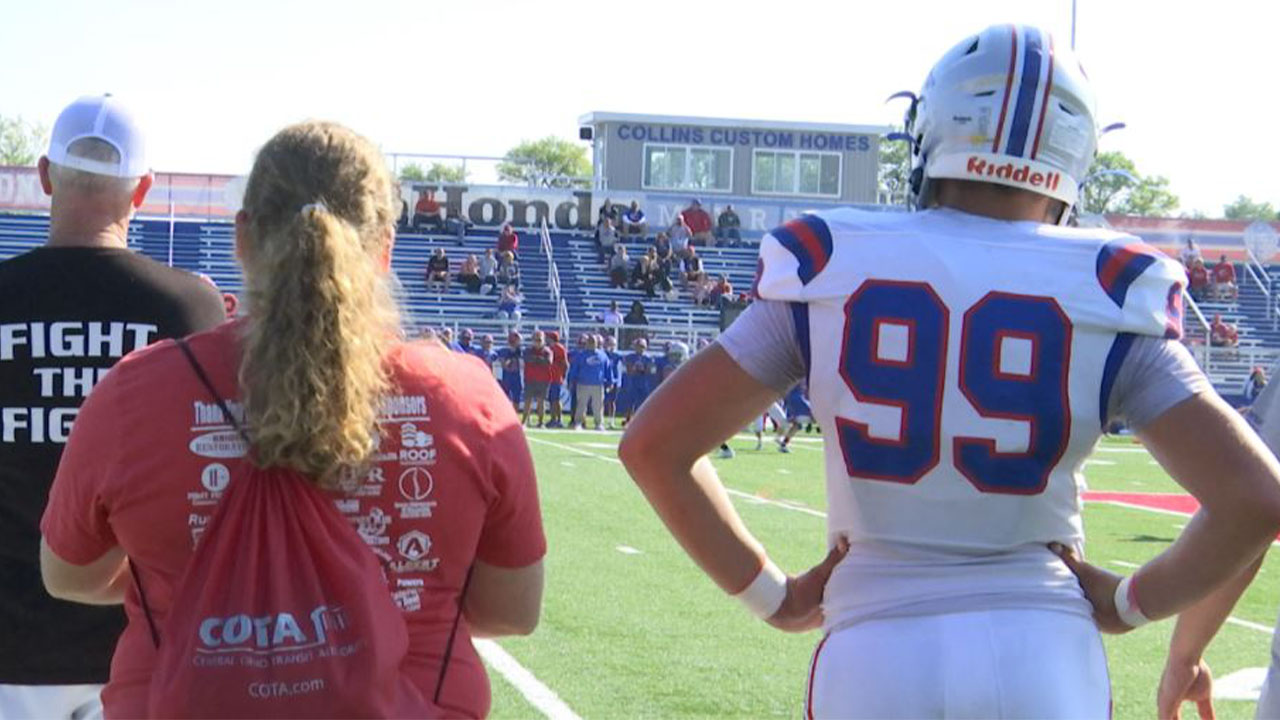 MARYSVILLE, Ohio (WCMH) – It wasn’t difficult for Jordan Anspach to fall in love with football at the age of six.

“It was pretty natural,” said Scott, Jordan’s father. “When I was growing up I was an active young kid and I played sports and I just thought Jordan would do the same.”

But love, like life and football, can be complicated.

“There have been a lot of ups and downs over the years,” Jordan’s mother Josie said. “He really had a love-hate relationship with his ears as we call them.”

At the age of six months, doctors diagnosed Jordan with profound deafness.

“This is our third child, so we noticed that he didn’t act like other kids when it came to alertness or dread,” Josie explained. “When you have children with special needs of any kind, I think it makes you all the more grateful for the experience.”

“We always kind of agreed that we weren’t going to treat him any differently from the rest,” Scott added.

So, like many boys in his hometown, Jordan wanted to play high school football for the Marsysville Monarchs.

“We encourage him to participate in whatever he wants to do. He might have to do it in a way a little different than some people, ”Josie said.

Three seasons ago, American Sign Language interpreter Sarah Koza joined the Anspach team and, consequently, the Marysville football team. She attends almost every practice and game with Jordan, using sign language in huddles and on the sidelines.

“She’s always with me,” Jordan said with a smile.

“He doesn’t have to worry, ‘Does she understand me? Does she know what I’m saying? ‘ Josie said. “Sarah is awesome.”

“The biggest learning curve has definitely been learning all the terminology in football,” said Sarah. “Jordan and I kind of learned it together and we help each other, we question each other. We just have to support each other all the time. It’s really a team effort, so if I do it right, it will. do good.

Their daily example of teamwork and communication has also translated into the success of the entire Marysville team.

“I was a little anxious and a little nervous about how I was going to communicate in a sport that relies on a lot of communication,” said Marysville assistant coach and Jordan defensive line coach Mike Young. , who adds that working with Jordan has made him a better coach. “It really got me thinking about the way I approach training, meetings, games and how I communicate with the players.”

Mike said it made Monarch players better teammates as well.

“Every once in a while we have to move and move and they will come and they will hit it and pat it to make it move. So I think the added responsibility of taking care of one of their own, for our players, has been a great motivator, ”said Young. “Jordan is an extremely hard worker. He sometimes has to work harder than his peers just to make sure he understands what I want from him, what the team needs from him, and he doesn’t let anything get in his way.

Not even a change of position. Jordan settled into a strictly defensive line, particularly a nose tackle so he could line up directly over the ball and see the snap. He was playing both attack and defense, which was a lot.

A change he made successfully, playing in a few college games this year as a junior.

“I think it gave him more confidence in all aspects of life,” said his father, Scott. “I’m just proud of him!

“I am sometimes his number one fan. I’m really into games now! I’ll scream and scream whenever he gets a tackle. I feel so proud. I love watching him play in the games, ”Sarah said. “Just because you can’t hear doesn’t mean you can’t be a great athlete and Jordan is proof of that.”