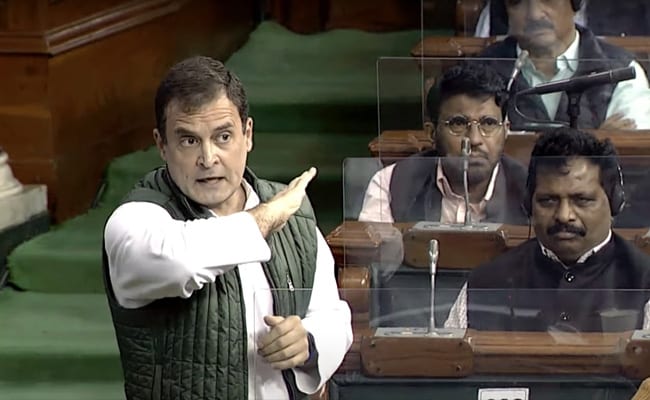 Reading between the lines of Rahul Gandhi’s speech

In these times of hyper-nationalism, Rahul Gandhi invoked another vision of India. An India where states have primacy and independent identities, but are united within the unity of one nation. This idea is not new; it is the founding principle of our Constitution. On the face of it, all Rahul Gandhi did was quote the Constitution which calls India a “Union of States”.

In a sense, Rahul Gandhi claimed that this idea of ​​a federal India ran through his veins. Her great-grandfather spent 15 years in prison for fighting, her grandmother was shot in the chest to defend her and her father was shattered to protect this idea of ​​India, it said. he said yesterday in Parliament. And so, who better to resurrect this vision of India as a negotiated partnership of states than Rahul Gandhi himself?

This was Rahul Gandhi’s overt positioning, calling on state parties to see him as their natural ally and representative at the center. This is an attempt to rally the regional parties around the Congress, two years from the next legislative elections. Underlying the federalism rhetoric, however, was a secret binary of a new “Us vs. Them” – a divide between the Hindi language belt (including Gujarat) and the rest. It was never said explicitly, but it was tossed around, through some assertions.

The first of these was when Rahul Gandhi said to the Treasury benches, “You will never, in your lifetime, rule over the people of Tamil Nadu; it cannot be done.” In a sense, he was making a sociological statement of the cultural dissimilarity between Tamil Nadu and Delhi which makes it impossible for Hindi belt parties to win elections in that state (“it cannot be done”). Of course, this claim was immediately diluted by making pseudo-historical claims about the nature of the various empires in India that have ruled over the “last 3,000 years”. But Rahul Gandhi almost immediately returned to his original theme, accusing the ruling party of mistakenly thinking it can “suppress” all the different “languages, cultures and histories” of states.

He moved on to the example of Kerala, again far from the seat of power in Delhi. “The people of Kerala have a culture – I’m now a member of Parliament of Kerala, I understand it a little better – they have a culture, they have a dignity, they have a history.” Rahul Gandhi was careful to leave himself a way out, not making the Hindi belt theme too obvious against the rest. He did this by immediately following the example of Kerala with reference to the culture and language of Rajasthan. Yet anyone who listened carefully to the speech and noticed the nuances, intonations and body language would sense that Rahul Gandhi was speaking from a distinct cultural divide between the Hindi belt and the non-Hindi states.

Of course, the speech was also about the opposing ideas of federalism and an authoritarian center. Rahul Gandhi compared this centralized power to the authority of the “king” and claimed that the Congress party had always been ideologically opposed to the hegemony of the center. This, as the history of the Congress party tells us, is a ridiculous claim. It is well documented how successive Congress governments, beginning with Nehru’s, have increasingly strengthened the Center and undermined federalism. If Nehru had to compromise with the regional satraps in Congress, Indira Gandhi dismantled the whole system by disenfranchising heads of state and appointing cyphers to head state parties. While Rahul Gandhi now represents Kerala as an MP, his grandmother as Speaker of Congress and his great-grandfather as Prime Minister were to use the notorious Article 356 to remove the majority government from Kerala. EMS Namboodiripad.

At that time, the Congress party represented the “centralizing” tendency that suited big business – it wanted unified laws that would facilitate trade across India. It was also a natural corollary of “Nehruvian socialism,” which was a top-down view of state-driven industrialization overseen by bureaucrats and technocrats. During the Nehru era, the demands of regional elites were balanced as much as possible by allocations to the states, as part of a centralized planning process. Indira’s attack on the “Syndicate” completely shut down this avenue by replacing Congress leaders who represented regional elites with her own candidates. This process, ironically, alienated regional elites from Congress and played an important role in the rise of regional parties.

If Rahul Gandhi had read contemporary commentaries from that time, he would have found an echo, in the governments run by his own family, of what he accused the Modi regime of. Here is what the political scientist Partha Chatterjee wrote in 1991, just after the assassination of Rajiv Gandhi: “The successive tragedies that have befallen the Nehru-Gandhi family are not unrelated to the fact that the Congress system since the era of India Gandhi never ceased to imitate the form of monarchical power… It is a corollary of the monarchical form of power that the violence of the Indian state…should have been perceived as the violence perpetrated personally by Indira or Rajiv Gandhi. Their killings were also personalized acts of violent retaliation.”

In 2004, when Rahul Gandhi became an MP, the balance of power had shifted to some extent. If the Congress imposed itself as the most important party, the role played by the regional elites of Andhra Pradesh and Maharashtra was not insignificant. This would later manifest in the rise of the regional capital of Andhra Pradesh and its nationwide spread during the UPA years – GMR, GVK, Lanco, to name a few. Yet the centralizing tendencies of the Congress “high command” meant that it tried to disempower regional leaders, weakening local party units, in the process.

Today, Rahul Gandhi recognizes that there may be space to unite the interests of regional elites from outside the Hindi-speaking belt who have seen their prominence diminish as a handful of business houses have taken control of almost all sectors. He is betting on the potential for regional capital to worry about the rise of Zaibatsu-Chaebol type mega-conglomerates. Regional elites understand that they need a voice at the center to reverse this process. They may support regional parties in the state, but they need a national alliance to unite as a central interest group. Rahul Gandhi hopes that by promoting the idea of ​​India as a “union of states”, he can position Congress as the central representative of the regional elites.

Disclaimer: These are the personal opinions of the author.

Tokyo World: A taxi driver tried to overcharge passengers at a festival in Bristol