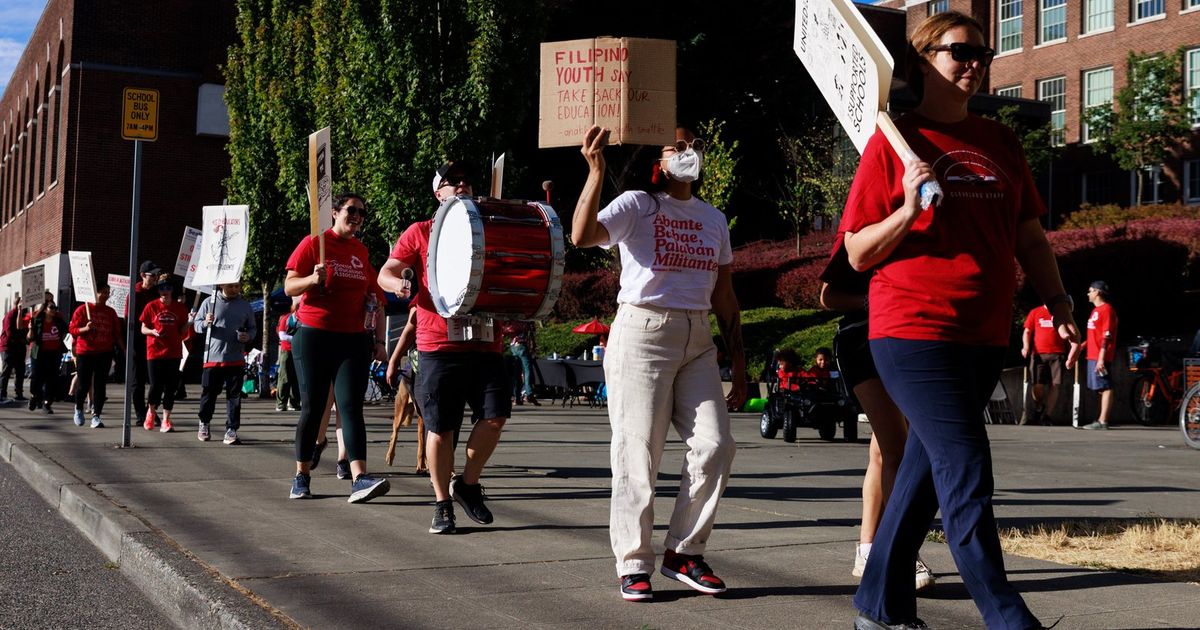 Seattle Public School educators voted on Tuesday to suspend their five-day strike, pending ratification of a full contract between the district and the union.

A suspension means educators will return to work on Wednesday and school will start for all students.

The vote follows an announcement late Monday night that the union and district had reached a tentative agreement. Union members are yet to vote on the deal, likely later this week. If the members reject the full agreement, the strike could start again.

According to a tweet from the union, 78% of the members voted and 57% of those members approved the motion to suspend the strike.

The vote came after a nearly eight-hour Zoom call with many tense exchanges between union leaders and members at large. At one point, more than 4,500 of the union’s 6,000 members were on the phone, and many of them reported experiencing technical problems.

A union member allowed a Seattle Times reporter to listen to the audio of the Zoom chat, and at several points during the call, a clearly frustrated union president, Jennifer Matter, argued with members at the union by-laws and voting and debating procedures, call several off-duty members and mute the microphones.

“I didn’t sign up to be told about how you spoke to members today,” one educator remarked. Matter apologized, adding that she came from a place of love and appreciation, but the heated exchanges with the members continued.

“I’m losing my temper, everyone,” she said minutes later. “We can’t keep asking the same question over and over again,” referring to several demands for clarification of the voting margins needed to suspend the strike.

“So you need to explain it better,” replied another educator.

Members who spoke on the call seemed divided; one faction supported a suspension of the strike, while another major group of educators complained that they had not had enough time to review a summary of the tentative agreement, which union leaders shared towards midnight Monday.

Pointed questions from members continued after the union vote opened around 3 p.m. Union leaders kept the call open until the polls closed at 4.30 p.m.

A vote by the full membership to suspend a strike is a change from 2015, the last time the union went on strike. In this case, union leaders and a representative assembly of members voted to suspend their work stoppage.

A copy of the full contract was not immediately available and is usually not made public until it has been ratified by union members. The contract must also be approved by the school board.

But a summary showed Seattle educators and the district agreed to pay 7% raises for certified and classified staff. The district originally proposed a 6.5% raise, which included a state-funded 5.5% inflationary adjustment.

In the second year of the contract, members would receive a salary increase of 4% for inflation and 3% the following year. If the state funds a higher inflationary adjustment, union members will receive the larger amount, according to the tentative agreement.

Classified personnel – employees who do not require a school certificate – will also receive a one-time bonus in December of $1,500. This category includes teaching assistants and office staff.

Under the new contract, if approved, classified replacements would enjoy some of the same benefits as certified replacements – accruing sick days and bereavement leave after being on assignment for 20 days, having sub -senior officer and receive professional development enhancements.

Another contentious point in the negotiation was whether to use teacher-student ratios in special education and multilingual programs. The educators wanted to keep the ratios and the district wanted a workload calculator model instead.

According to the contract summary, most teacher-student ratios for Individualized Education Program (IEP) students have remained the same. Some teaching aids have been added to classrooms to help students with IEPs. If approved, the district’s special education task force will create a workload calculator for use by the 2023-24 school year in a select number of schools.

The ratios of staff and students in the multilingual program would also remain the same, according to the summary. Additional incentives for teachers to receive English and bilingual endorsements would be included in the contract if approved. There would also be retention bonuses for educators who already have these endorsements.

The Amusing “See How They Run” Does The Murder Mystery Well