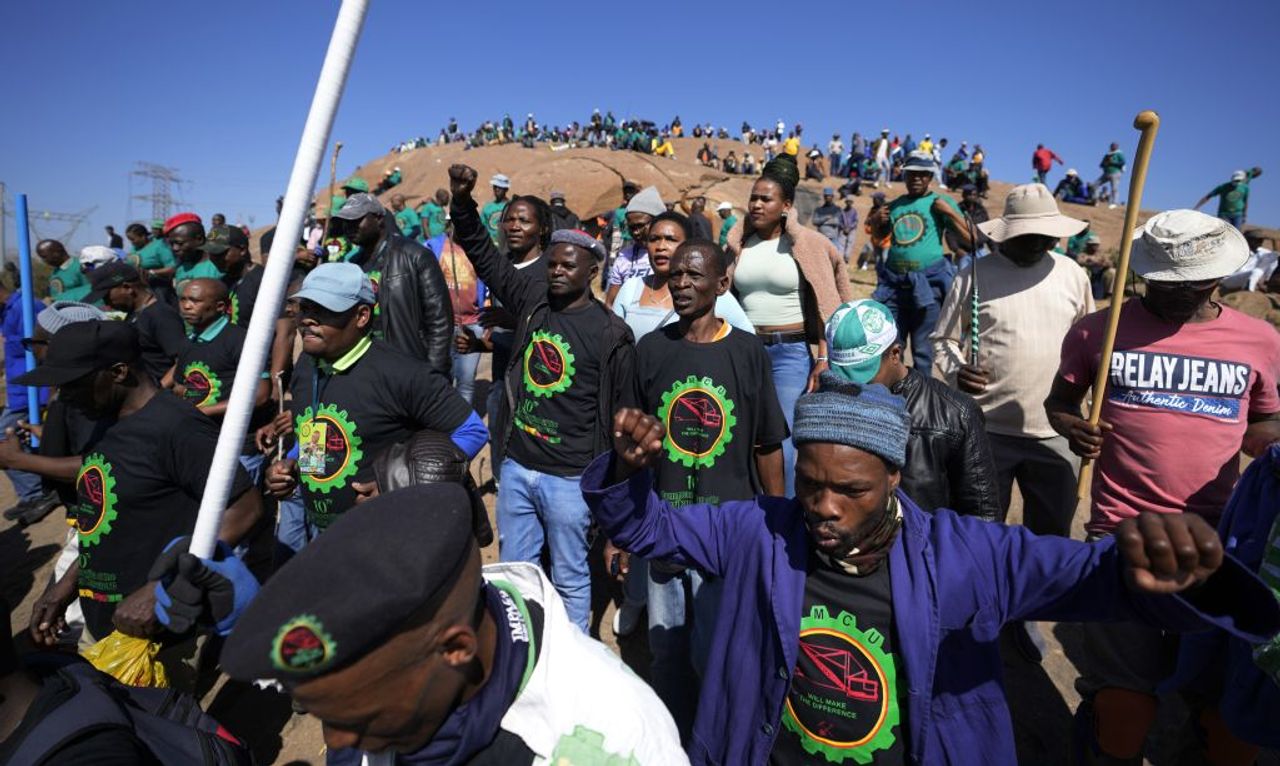 South African unions stage ‘stay away’ as warning to ANC

Thousands of workers took to the streets of Pretoria, Cape Town and other major cities across the country on Wednesday. They were protesting against the soaring cost of living, power cuts and widespread unemployment that have made living conditions intolerable for workers and their families.

In Pretoria, workers marched on Union buildings where the South African presidency is located, holding signs saying, “Stop taxing basic foodstuffs”. They called on President Cyril Ramaphosa and his African National Congress (ANC) government to bring down the rising cost of living.

One woman told the BBC: “We are tired. The cost of living is too high now, we can’t afford anything. It’s tuition, it’s transportation, it’s rent, that’s it.

She added: “We can no longer live, and we are without [pay] been increasing for four years now, and things are getting hectic now. The government must step in and do something now.

Last week, the South African rand fell another 5% against the US dollar as the Federal Reserve discussed further interest rate hikes, a move that will exacerbate the economic crisis engulfing the already heavily indebted country.

South Africa is the most unequal society on the planet. A staggering 46% of workers are unemployed, 30.3 million of the country’s 59 million people live in poverty and 13.8 million face food shortages.

Leon Trotsky (1879-1940), was the co-leader of the Russian Revolution of 1917, socialist opponent of Joseph Stalin, founder of the Fourth International and strategist of world socialist revolution.

The last time COSATU called a National Day of Action was in October 2020 to protest the government’s response to the pandemic – including curfews implemented with horrific police brutality – which fueled unemployment and poverty while protecting the corporate and financial elite. According to official figures, a gross underestimate given the lack of testing, more than 102,000 people have lost their lives to COVID-19.

COSATU has for decades been in a triple alliance with the ANC and the South African Communist Party (SACP). Together they worked to suppress workers’ struggles and prevent them from taking a revolutionary path to end apartheid, thus ensuring the survival of South African capitalism and averting the eruption of political and social conflict in all former colonies. of the imperialist powers.

Since the ANC came to power after the 1993 elections, COSATU has done everything to control its members. But along with Saftu, he called for a national walkout to stem growing anger over the government’s lack of response to the cost of living crisis. Their hope is that this limited action, combined with leftist-sounding rhetoric against awarding 3% of Ramaphosa’s salary to himself and ministers, will defuse workers’ anger.

COSATU and Saftu are desperate to restore the credibility of the unions, secure the political ties necessary for the capitalists to maintain their exploitation of the working class, and warn the ANC that it is sitting on a social volcano. Ramaphosa is now so widely reviled that the party long associated with fighting the hated apartheid system could lose the 2024 election.

In 2017, COSATU backed Ramaphosa as successor to Jacob Zuma, who was forced to step down amid growing corruption allegations, as ANC president. Ramaphosa, who once led the country’s largest union, the National Union of Miners before exploiting the ANC’s Black Economic Empowerment structures to become a multi-millionaire, used his position as a non-executive director of mining conglomerate Lonmin to call the government to take action against striking miners in 2012. The ANC responded by sending security forces to end the strike. In the resulting clashes, they shot and killed 34 miners and injured 78 others.

Since then, the ‘Butcher of Marikana’ has done all he can to prop up South African capitalism, cutting corporate taxation while cutting workers’ wages, reneging on public sector wage agreements and drastically reducing the quality of life. This earned him the undying hatred of South African workers.

Striking gold miners in Sibanye-Stillwater booed COSATU guest of honor Ramaphosa at the May Day rally in Rustenburg, the center of the country’s mining region. While COSATU spokesman Sizwe Pamla apologized for the “regrettable” and “unacceptable” actions, he said it was an understandable expression of workers’ frustration with the ANC government.

He warned the ANC: “Historically, Workers’ Day is a day when workers reflect on their struggles and push for change. This is a message that the ANC cannot claim to ignore and which can no longer be ignored. Marxist revolutionary and political theorist Leon Trotsky once said: “The party which relies on the workers but serves the bourgeoisie, in the period of the greatest aggravation of the class struggle, can only smell the odors which ‘escape from the waiting grave’.

Ramaphosa and the ANC government ignored the warning and carried on as usual, using security forces to intimidate workers and suppress protests.

Over the past week, council workers on wage strike in Middelburg, Mpumalanga, have faced violence from council-employed security guards. The council has suspended 100 workers who walked out on August 15 to demand a raise to level 5 on the pay scale. When workers entered council premises to collect their suspension letters, security guards opened fire, killing one and hospitalizing three others.

It follows the killing of at least four workers and thousands injured by police during protests against poor service delivery, high taxes and the exorbitant cost of electricity in Johannesburg’s Thembisa township after that the authorities have canceled free electricity and water.

Last month, hundreds of ANC supporters marched through Johannesburg, South Africa’s commercial capital and largest city, with a list of economic demands and calls for Ramaphosa, now mired in scandals, to to go away. In the most recent scandal, he is accused of covering up the alleged theft of $4million hidden from his Phala Wildlife farm, with the help of Namibian officials and his personal security guards who are accused of kidnapping and tortured the thieves. The ANC rally followed calls from opposition parties for Ramaphosa to step down, with Economic Freedom Fighters (EEF) leader Julius Malema calling for his impeachment over the matter. The EEF was established by Malema, a former African National Congress Youth League, in 2013.

Former ANC President Thabo Mbeki issued a rare criticism of Ramaphosa, saying he had no plan to tackle poverty, unemployment and inequality, and predicted civil unrest that could “trigger our own version of the Arab Spring”.

Despite the widespread unrest, COSATU and Saftu made little effort to build to keep the masses away, making few substantive demands on the government. Saftu General Secretary Zwelinzima Vavi even told reporters that the unions did not expect large numbers of people to join the marches, blaming it on the dire state of public transport. He said it was more important that the workers take part in the national strike. In this instance, the appeal received a limited response from workers.

The deep distrust of trade unions manifested by the relatively low participation expresses the need for new forms of organization of the working class. To give political and organizational expression to the developing global movement of the working class, the International Committee of the Fourth International (ICFI) fights for the construction of rank-and-file workplace committees, coordinated nationally and internationally by the International Alliance of Base Committee Workers and Building a South African Section.

Launch of the SpIRIT satellite by the Australian space agency