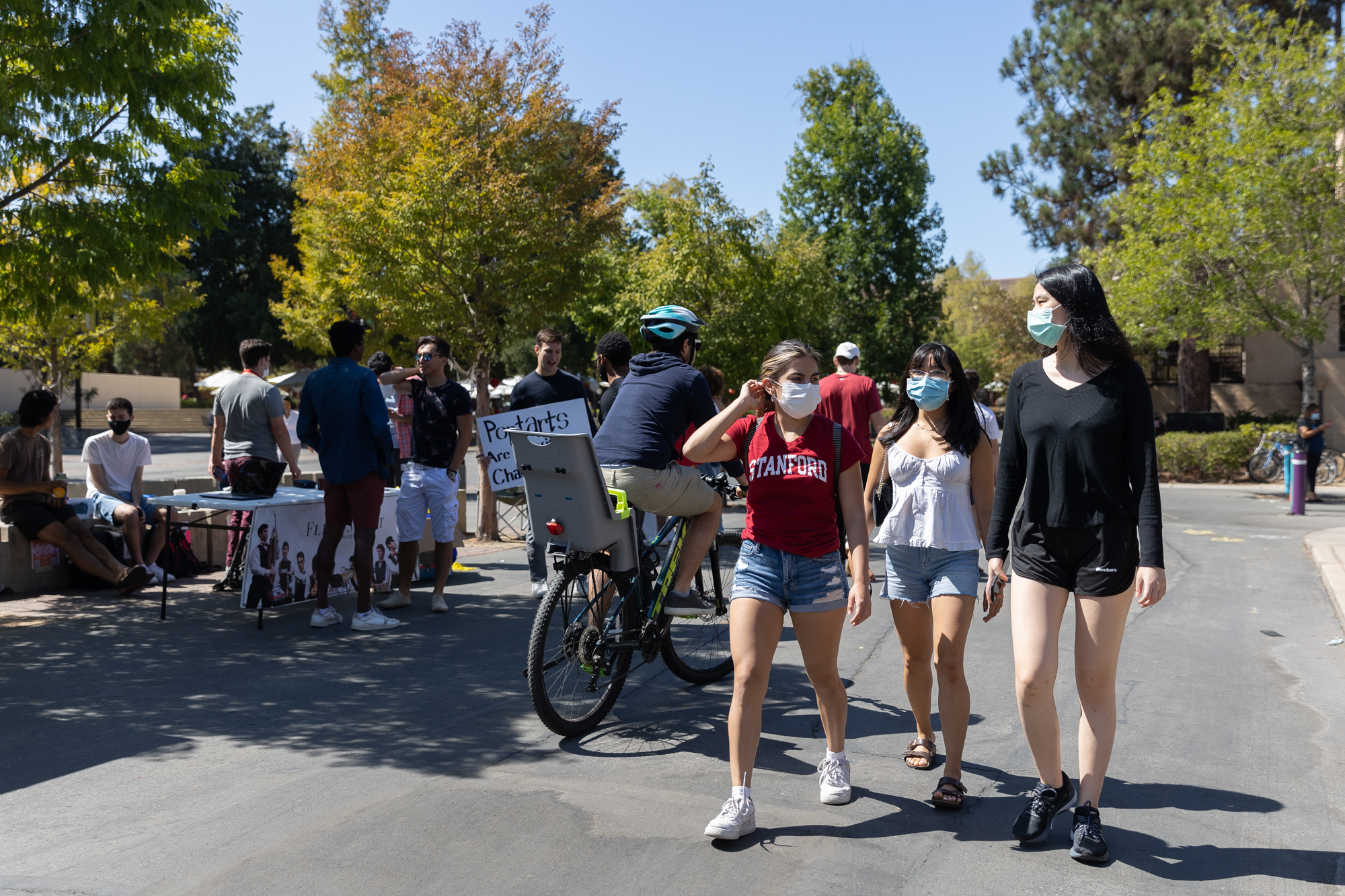 When Saga Helgason was admitted to a graduate program at Stanford University last year, she was faced with the prospect of taking classes from her home in Iceland, which reportedly resulted in a jet lag of seven time.

Helgason instead decided to try and wait until the pandemic was over and postpone his admission until this fall. She is now on campus and preparing to begin a one-year Masters program in Russian, Eastern European and Eurasian Studies.

â€œI’m in the same time zone and meeting people – it’s part of the whole Stanford experience,â€ Helgason said as she stood outside the campus bookstore last week. “It’s not just taking classes, it’s also meeting people and being here.”

She is one of thousands of Stanford students who returned to campus for face-to-face lessons this fall. Stanford’s fall term begins today (September 20). This year’s incoming undergraduate class is the largest in Stanford history, with 2,131 freshmen and 66 transfer students, according to the university.

As of March 2020, most Stanford courses are taught remotely. Teaching is now resuming in person, with only a few courses offered online, university spokesperson EJ Miranda said in an email. He declined a request from that news organization to interview a university administrator about the reopening.

Stanford requires all students to be vaccinated against COVID-19, except those who receive a religious or medical exemption. Any unvaccinated student must pass a COVID-19 test twice a week, while those who are fully vaccinated still need to test once a week.

Masks are mandatory indoors, including classrooms, and are highly recommended in crowded outdoor environments where a 6-foot distance cannot be maintained between people.

Freshman Kwame Ocran was happy to be on campus last week and said he feels good about the demands for vaccines and testing, but added that it can be uncomfortable at times to know how to socialize with other students. â€œYou want to stay safe,â€ Ocran said. “And you cannot guarantee that other people will follow the same procedures.”

Student evenings indoors are officially banned until October 8, although gatherings in dormitories or individual apartments are allowed, provided they do not exceed four times the normal number of occupants.

Throughout the spring, undergraduate courses were mostly remote, Miranda said, with higher education “almost entirely remote.” The start of the fall term marks the first time since the pandemic struck that face-to-face instruction is the norm.

Some courses will remain completely remote this fall “for educational reasons due to the imperatives of masking”, according to the university website. This includes some language and music lessons. One of Helgason’s courses, a language learning course, takes place online.

â€œI would much prefer to have it in person, but due to the mask’s mandate, it might be easier for us to learn when we can see the professor’s face,â€ she said.

Freshman Winnie Chen said she saw larger lectures being held online, including one of the classes she was taking. Chen and fellow freshman Kristy Chan said they don’t know what campus normally looks like, but are getting used to the way things work this year.

Ocran said he was happy to be able to attend classes in person, especially after seeing how his online classes were “ineffective and honestly unmotivating” in high school.

Her freshman colleague Biak Tha Hlawn was also happy to be able to resume the learning in person, but said she hoped the university had procedures in place to support students in case the campus had to close again. .

â€œI hope they don’t fire us unexpectedly,â€ Hlawn said. “This is my biggest worry.”

Transmission of COVID-19 is unlikely among those masked and vaccinated, the university said in messages to students and staff.

“Such an environment – highly vaccinated, with a mask worn in many settings – is what we expect to have at Stanford this fall,” wrote associate vice-president of environmental health and safety Russell Furr. in a September 2 update.

If someone who has attended an in-person class is positive for COVID-19, the entire class will be notified that there has been a positive test, according to university protocols.

“Because face covers are mandatory and vaccination rates are high, students and instructors in a class are not considered close contacts of high risk exposure and will not be asked to take action. special unless they have been identified as close contact of high-risk exposure in an additional setting outside the classroom â€, according to university orientation in class this fall. “They will be encouraged to continue testing, watch for symptoms and stay home if they feel sick and get tested for COVID-19.”

Undergraduates moved into their dorms earlier this month on pre-scheduled hour-long appointments, with two guests allowed in per student.

According to Ocran, the move-in process went better than expected. Hlawn also said she was happy with the process.

â€œEverything was efficient and convenient,â€ Hlawn said. “It was good.”

She also praised the university for creating a welcoming environment, particularly highlighting the orientation of FLI students, which is aimed at first generation and low-income students. Hlawn said it was uplifting and she felt supported.

One hiccup on returning from Stanford this fall was that resident assistants announced they were going on strike earlier this month. The RAs allege the university has failed to respond to demands related to compensation, COVID-19 safety protocols and a new undergraduate alcohol policy, according to student newspaper The Stanford Daily. RA oppose the requirement that they claim to have consumed minors at university.

The striking RAs refused to attend the training, but helped prepare the dorms and welcomed the residents to the campus, The Stanford Daily reported. Miranda said in an email that “the undergraduates are moving into their accommodation as planned.”

At the sophomore summons on September 19, a group of more than 150 sophomores protested against the university’s new drug and alcohol policy and its response to sexual violence, including holding up a banner reading “Stanford Protects Rapists”. The Stanford Daily reported. Protesters opposed an original version of the new policy, which they feared would prompt students not to report sexual violence for fear of facing disciplinary action for alcohol or drug use by minors. The policy has since been updated to address some of the concerns, according to the Stanford Daily.

University administrators and student lecturers celebrated the incoming class at an opening ceremony on September 14. Stanford President Marc Tessier-Lavigne spoke about addressing the challenges we collectively face, according to an article on the convocation of the university.

“If we learn anything from our experiences of the past year and a half, it should be to re-engage with the world and with each other with a renewed sense of purpose and with an urgency to make the most of the opportunities that lie ahead. are available to us, “said Tessier-Lavigne.

The university is also hosting â€œWe are Stanford: A Festival of Reflection and Renewalâ€ from September 30 to October 10 to mark the reopening of the wider campus this fall. Events include concerts, yoga classes, and meditation sessions.