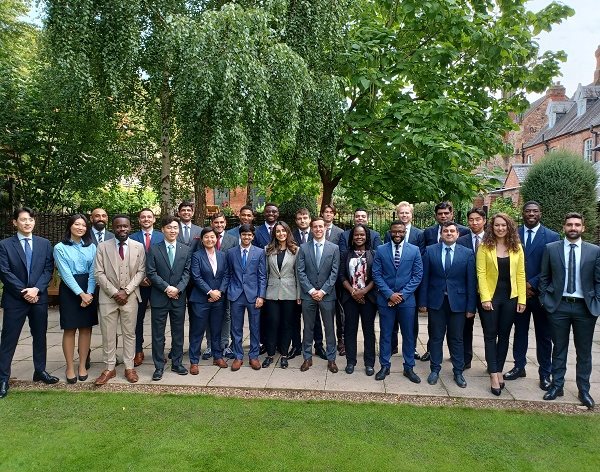 Students from as far away as Singapore and South Africa have arrived at De Montfort University Leicester (DMU) to take the prestigious FIFA Masters course.

The one-year course, which is coordinated by the International Center for Sports Studies (CIES) and supported by football’s world governing body, FIFA, involves students spending a semester of study at the International Center for Sports Studies. history and culture of sport at DMU (ICSHC) before also spending a semester at the SDA Bocconi School of Management in Milan, Italy, and at the University of Neuchâtel in Switzerland.

Nihan Cabbaroglis, who is a sports commentator for basketball, tennis and athletics for the Eurosport television channel, put life in front of the camera on hold for a year to complete her master’s degree.

Nihan, from Turkey, said: “I see the course as a chance to discover the opportunities that exist on the international scene. I really want to move towards sports management. I will definitely be going to a Leicester Riders game while I’m here (Leicester’s professional basketball team and current British Basketball League men’s title holders). We have a field trip, but I think I’ll go before that.

Renae C Samuel is from Grenada in the Caribbean and was the director of women’s football at the Grenada Football Association. She was also the secretary of Queen’s Park Rangers FC in Granada.

Renae said: “I hope firstly that I manage to complete the course and then I want to share the knowledge I gain here to help develop the sport further in Grenada.”

“My two months of madness with Usain Bolt”

Find your new home at DMU. Come to our next open day

Mikkal Haugan, from Oslo, Norway, leads development projects for the Norwegian Football Federation. He said: “Above all, I look forward to meeting a lot of interesting people and I look forward to learning a lot from all the world leaders in the sports industry that we will meet. Wasn’t sure what to expect from Leicester but it’s a great city.

He said: “It’s an honor for me and a privilege to be here at DMU among all these guys. I hope to not only make friends and network, but also bring back my learning and understanding of the history of sport in South Africa to provide a different perspective for young people.

Professor Martin Polley, Director of the International Center for the History and Culture of Sport at DMU and Co-Scientific Director of FIFA MA, said: “I enjoyed meeting the students during the induction and hearing about their various horizons and their impressive academic and professional backgrounds. achievements. I now look forward to working with them in the classroom as we explore the historical and cultural aspects of the sport together.

Dr Heather Dichter, FIFA Master Co-Scientific Director and Associate Professor of Sports History and Management at DMU, ​​said: “I have taught a bit about FIFA MA for the past few years, but now at the During my first year as Co-Scientific Director, it was a pleasure to meet all the students during the first two days of integration. I look forward to working with our Swiss and Italian colleagues and teaching the cohort of students this year.

James Panter, FIFA Master Module Manager at DMU, ​​added: “Students have traveled from all over the world to begin their studies here in Leicester. After a very busy summer preparing for their arrival and producing a schedule combining academic sessions, guest speakers from industry and field visits from some of the biggest names in world sport, we are now looking forward to starting the new year. academic”.

During the Leicester-based Humanities of Sport module, students will address themes such as the birth of modern sport, equality and inclusion, women’s sport and the internationalization of sport.

Alumni who have studied at DMU have been inspirational personalities in their chosen sporting discipline and have attended FIFA Masters to go on and lead institutions around the world.

They include former Manchester United FC midfielder Park Ji-Sung, Sanaa Darawsha, who was the first Arab-Muslim female referee to officiate in the Israeli soccer league, and Eduardo Tavares, who previously served as loan manager. at Chelsea, like Tammy Abraham. and Mount Mason.

Emma Twigg, who studied the FIFA Master at DMU in 2016, won gold for New Zealand at the Tokyo Olympics last summer.

Emma won gold in the women’s sculls. She previously spoke at the university just before the Olympics about how she trained regularly on the River Soar at the bottom of the DMU campus and returned at the July 2022 course graduation ceremony as class sponsor.

More and more FIFA Masters alumni are also getting involved in non-profit organisations, charities and sports development work to help minorities and people in areas normally deprived of sport.