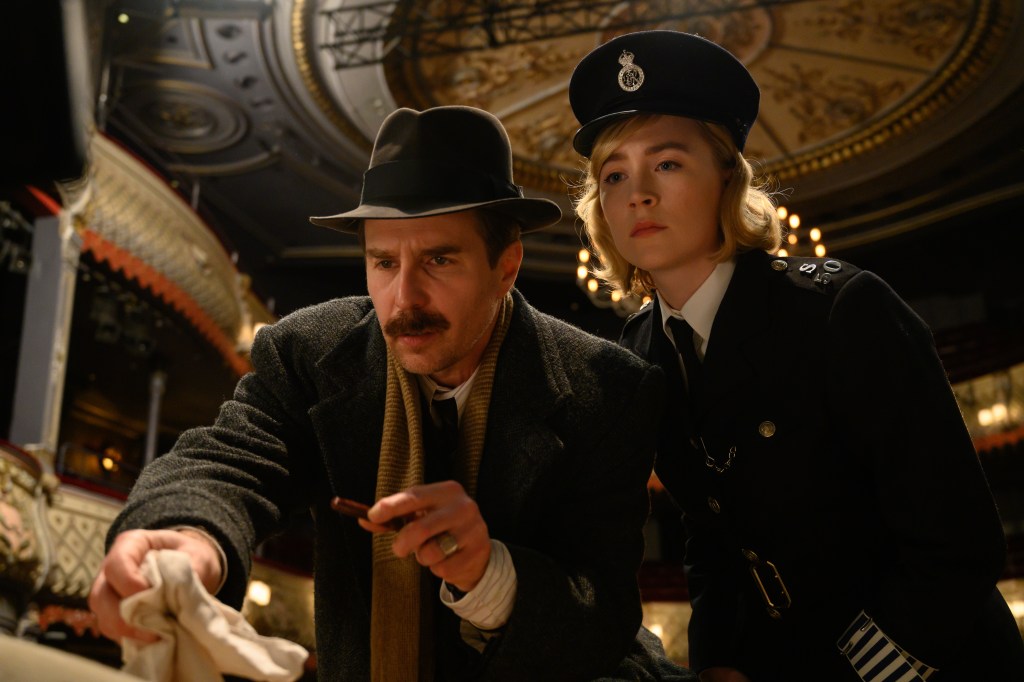 The Amusing “See How They Run” Does The Murder Mystery Well

While Viola Davis is likely to reign supreme this week as ‘The Warrior King’ and horror director Ti West are expected to smash their way to box office victory with their ‘X’ prologue ‘Pearl’, it There are other offerings to consider, including a snarky, comedic mystery, a surreal truth-based drama from a filmmaker that deserves more attention, and a sexy, guilty-of-fun Showtime series that revisits “American Gigolo.” .

“See how they work”: Agatha Christie fans should be ready to turn on the “little gray cells” watching this charming tribute to the Queen of Mysteries. Mark Chappell’s witty script sets the stage for murderous shenanigans in 1950s London in a successful staging of Christie’s “The Mousetrap.” When a Hollywood filmmaker shows up with plans to make a big-screen adaptation of this play, the corpses start to pile up, summoning the spy skills of Inspector Stoppard (Sam Rockwell, in grumpy gumshoe mode and all seen) and the by-the-book Constable Stalker (Saoirse Ronan, so well cast). Director Tom George’s deft production features an old-fashioned mystery story and a vast cast of usual and unusual suspects, including Harris Dickinson as a full-on actor, Ruth Wilson as a show operator and David Oyelowo as a playwright/screenwriter, as well as the terrific leads. “See How They Run” is a clever mystery puzzle that plays its sleight of hand with skill and wit. Details: 3 out of 4 stars; in theaters September 16.

“The Silent Twins”: She’s by no means a household name, but Polish filmmaker Agnieszka Smoczyńska should be, especially after the release of her latest genre-defying gem. Based on Marjorie Wallace’s non-fiction book of the same title, “Twins” sports similar artistic brushstrokes to Peter Jackson’s “Heavenly Creatures” with its unsettling true story about two strangers. June (Letitia Wright) and Jennifer (Tamara Lawrence) are black twins who would only talk to each other. This changes when it is decided that she wants to experience life so she can create realistic and deep characters on the page. The imaginative inner world the duo create as children – using puppets – further reinforces how the two girls feel. Dark but exciting, “The Silent Twins” is difficult to pull off both as a revealing character study and as a commentary on the cultural “norms” of the 70s and 80s of the time. It works from start to finish and will hopefully lead viewers to seek out Smoczyńska’s other outstanding works, including her mermaid story “The Lure”. Details: 3½ stars; in theaters September 16.

“American gigolo”: Much has been made of the drama behind the scenes in this 1980 reinterpretation of Paul Schrader’s iconic American materialism via the woes of a hot male escort, then played with clinical precision by Richard Gere. (To recap, the film’s original developer and showrunner, David Hollander, was ousted after misconduct allegations surfaced.) This guilty pleasure of a Showtime series finds the versatile Jon Bernthal sizzling onscreen as than Julian, an ex-con whose mother sold him into the sex trade. In the first episode, an inmate confession springs Julian from the joint, having been wrongfully locked up for 15 years by a detective (Rosie O’Donnell) for the murder of one of her clients. With a new life in Venice Beach, Julian sets out to find the real killer as well as the woman (Gretchen Mol) he’s developed a heartbeat for. “Gigolo” ventures into lewdness, including the pedophilia of a teacher with a student, but it also features compelling secondary characters and a more complex protagonist with a toxic backstory. Many will hate it, but after three episodes I was ready to see more. Details: 3 stars; now available on Showtime.

“Pinocchio”: “Forrest Gump” director Robert Zemeckis pulls all the wrong strings with this live-action revamp of the 1940 Disney classic. Hardly a subtle director, Zemeckis overdoes everything — the special effects, the tender moments, the musical numbers — and nearly destroys this sweet and charming story about a watchmaker and his puppeteer. Tom Hanks just doesn’t work as Geppetto. He just can’t sing and his accent is all over the place. Is it American? It’s Italian? Is it a merger? Who knows? Does not work. Then there’s Jiminy Cricket, with Joseph Gordon-Levitt adopting a fake Southern accent for reasons I don’t understand. The few bright spots include Cynthia Erivo hanging from the rafters “When You Wish Upon a Star”, Luke Evans chewing up the scenery as the dastardly coachman, and the digitized version of Figaro. Most of the scenes look and feel inauthentic while the action sequences are ridiculously over the top. It’s a misguided redesign and we can’t wait to see what Guillermo del Toro can achieve with his Netflix release, due out in December. Details: 1½ stars; available on Disney+.

“The Real Things”: Ruth Wilson is never shy about taking on tough roles, and here the adventurous actor gives a surefire portrayal of a depressed, sharp-edged worker drawn to the wrong guy, an ex-con (Tom Burke) who comes on strong and then plays with it. his emotions. This flying drama on the wall creates a stuffy, zoned existence that Kate (Wilson) inhabits. Based on Kay Davies’ novel “True Things About Me,” director Harry Wootliff’s austere film is heightened by his two flint performances with Burke – so good in Joanna Hogg’s “The Souvenir” – bringing the brooding and swaggering, but without ever overplaying it. But without the two tracks, “True Things” doesn’t offer much. Details: 2½ stars; available on multiple streaming platforms.

“The Book of Delights”: Desire and intimacy are not always so well represented on screen, either too heated or too idealized. “Book of Delights” cuts through all of this to craft a sexy, sexual story about bored and frustrated teacher Lori (Simone Spoladore) in Brazil who meets a variety of one-night stands to quell the doldrums. But things change when she meets a sexually fluid teacher (Javier Drolas). Director Marcela Lordy adapts Clarice Lispector’s novel with candor and emotion, making the viewer feel the torrid and sleepless nights endured by Lori (played with dexterity by Spoladore) as well as the undeniable attraction that embraces two lovers. Details: 3 stars; available on Apple TV and Vudu.

“Speak No Evil”: An exchange between two families who become friends while on vacation in Italy leads to an invitation to drop by for a visit. Things go downhill from here. The suspicious trait of Christian Tafdrup is as narrow and dangerous as a trip wire, a parable on xenophobia, cultural identity, etc. It’s spooky as hell and has a Shirley Jackson/Stephen King vibe throughout. The last minutes are really horrible. See for yourself. Details: 3 stars; in select theaters available today on Shudder.

Contract review is important for the evolution of business relationships