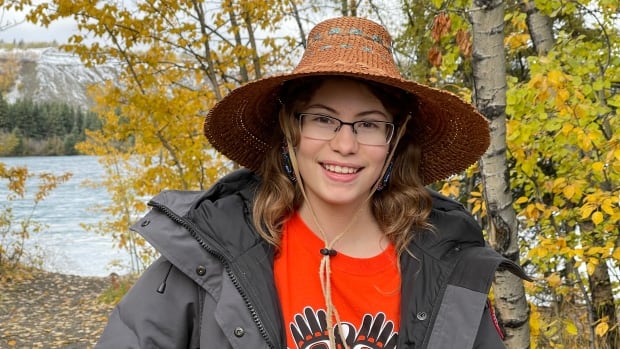 The endangered Tlingit language has only a few hundred speakers. This 13 year old is trying to change that

Cherish Clarke grew up hearing the Tlingit language spoken, but it was years before she fully understood how special it was.

“I was really grateful that I was, I think, one of the last generation to really grow up listening to my grandparents speak the language,” said the mother of two in Whitehorse.

“It’s hard because when you’re really young you don’t understand the meaning of what’s going on.”

Now Clarke, 36, is making up for lost time by tapping into her cultural and linguistic heritage alongside her 13-year-old daughter, Mariella Wentzell.

The two, both members of the Taku River Tlingit First Nation of Atlin, British Columbia, studied and worked to master the Tlingit language.

Tlingit is spoken throughout Southeast Alaska and parts of northern British Columbia and southern Yukon. According to Endangered Languages ​​Project, it is “critically endangered”, with only around 200 native speakers worldwide. The Alaska Native Language Center puts the number a little higher, at around 500 in that state alone.

“I think when Mariella was born I realized the importance of language and that we were losing our first speakers at an accelerated rate,” Clarke said.

Clarke enrolled her daughter in French immersion at a young age, believing that knowing more than one language would help Mariella learn even more. Then last year Clarke asked if Mariella wanted to learn Tlingit from her.

Tlingit is not considered an easy language to learn, as Mariella discovered.

“It has different rules of grammar and sentence structure, and it also includes an alphabet and larger sounds. [than English or French]”said Marielle.

Mariella and Clarke kicked off in the summer of 2020 with a four-week crash course hosted by the Children of the Taku Society, a local non-profit organization focused on preserving and revitalizing Tlingit culture. They learned 435 Tlingit words in those weeks, Clarke said.

This was followed in the fall and last winter by weekly immersion courses. Every Friday, Clarke and Mariella participated in three 90-minute lessons, which Clarke said would leave them exhausted at the end of the day.

A typical lesson would involve a handful of new phrases to learn and maybe a dozen new words, with an emphasis on total physical response, a method of teaching languages ​​that combines physical movement with verbal input.

Mariella’s school, FH Collins in Whitehorse, allowed some flexibility in her class schedule last year so she could have those Fridays to study Tlingit.

“I’m just grateful that, you know, the education system was able to support her on her language journey and learning Tlingit,” Clarke said.

“Mariella is really ahead of me.

WATCH | Mariella shows what she learned in her Tlingit language classes:

Both Mariella Wentzell and her mother strive to learn the language of the Taku River Tlingit First Nation of Atlin, British Columbia, despite its difficult grammar and sentence structure. Wentzell takes us on a tour of what she has learned. 0:36

Mariella plans to take more Tlingit classes this semester while Clarke has taken classes through Zoom with an instructor from Alaska. Clarke is also working on an online Tlingit dictionary.

Mariella said it was “amazing” to learn her mother tongue. She likes it when her friends at school ask her to teach them a few words.

“It was definitely an amazing experience,” said Mariella.

Clarke hopes they can inspire others.

“We were born in this land without a language, so I know language training for anyone can seem like a really unattainable goal,” Clarke said.

“We just hope we can help other people learn more about the language, because there are so many people right now who recognize the importance of Indigenous languages.”