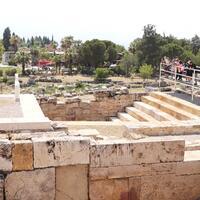 The gates of hell open to visitors

The Gate of Hell (Plutonium), which was discovered in 2013 by the Italian excavation team in Pamukkale, one of Türkiye’s UNESCO World Cultural Heritage Sites, has been opened for visitors. Plutonium, called “gateway to the land of the dead” in ancient sources, began to welcome hundreds of local and foreign tourists from day one.

Located in the ancient city of Hierapolis in Pamukkale, one of Türkiye’s most important cultural heritages, Plutonium was opened for short-term visits in 2018 during ongoing restoration works, but later visitors have again been banned.

The Gates of Hell is set to officially open to visitors in September.

Thanks to modern science, the mystery of the door was solved during the examinations. It was reported that the animals, sent to the cave during the sacred ceremonies held in ancient times at the Gate of Hell, died from the effect of carbon dioxide.

In the ancient city of Hierapolis, which was founded by King Eumenes II of Pergamum in the 2nd century BC and means “holy city”, an Italian excavation team, led by Professor Francesco D’Andria , discovered a structure that sheds light on the region. past.

D’Andria and his team discovered the Gates of Hell, which is considered the “gateway to the land of the dead” in the ancient world, and one of the original springs of thermal waters that formed the pools of Pamukkale travertine.

At the Gates of Hell, especially the fascinating statue of Hades, which has been restored to its original form, and the three-headed watchdog of Hell, Kerberos, attract attention some tourists.

Professional tourist guide Bekir Yavuz, who said tourists are interested in the site, said: “Tourists come here every day from different parts of Turkey. We accompany them. The gate of hell which has just been opened and which has been closed for a long time is a place known as the gate of the dead. Many tourists come here today because of the opening. It has a very different structure. Because the poisonous gas comes from underground, tourists know about it and ask us about it. »

The “Plutonium” in Latin and “Ploutonion” in Greek, was considered the gateway to the underworld in Greco-Roman mythology. In the structure that the Greek geographer Strabo included in his works of ancient Anatolian geography, the animals that were to be sacrificed to Pluto were brought to the temple and died at the gates of hell due to poisonous gases.

It is believed that the plutonium, which would have survived until the fourth century, was destroyed in order to prevent superstition arising from paganism after the adoption of Christianity, and after some time it was completely destroyed in the sixth century during the earthquakes that have occurred. in the city.

This Plutonium in Hierapolis has a very important archaeological value. This latest discovery proves the accuracy of the information contained in ancient literary and historical sources. The poisonous gas from the hot springs here still kills exposed small animals and birds. A special mechanism is put in place to prevent visitors from being hit by the gas, which also makes excavation very difficult.