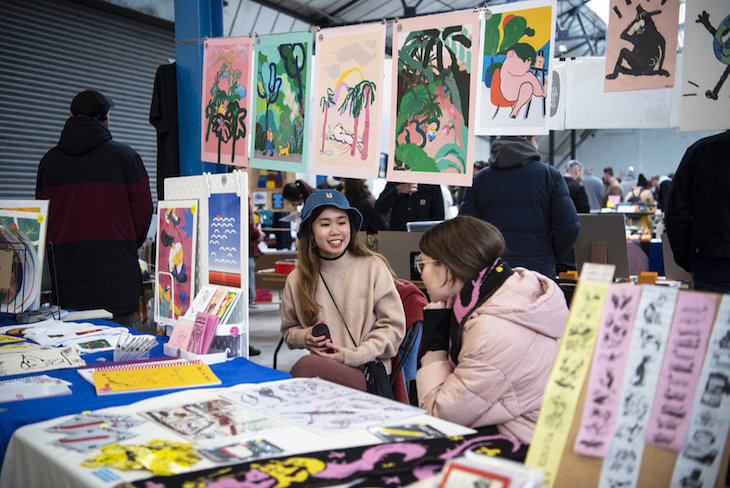 IMAGINE THE CHILDREN’S FESTIVAL: February mid-term begins this weekend, which means the Southbank Centre’s Imagine Children’s Festival is back, celebrating all facets of children’s literature. The program is loaded, suitable for all ages and all budgets. Southbank Centre, prices vary, some events require booking, February 9-20

Louise Bourgeois: One of our exhibitions to look forward to in 2022, the Hayward Gallery is hosting a retrospective of the work of Louise Bourgeois, using fabrics and textiles. She used everyday household objects like bed linen and towels, to cover themes of identity and sexuality, trauma and memory, guilt and repair. Hayward Gallery, £15, book ahead, February 9-May 15

STEPHEN HAWKING: After his death, the Science Museum acquired artefacts from Professor Stephen Hawking’s office, on display from Thursday. For the first time, a rare copy of Hawking’s doctoral thesis, his wheelchair, and his treasured board filled with scribbles and academic jokes are on display. Science Museum, free, February 10-June 12

CARIBBEAN HERITAGES: The approximately 6,000 Caribbean people directly recruited by London Transport in the 1950s-70s are the focus of Legacies: London Transport’s Caribbean Workforce. Stories – both positive and negative – are told through first-hand testimony, as you are invited to explore the legacies that live on London’s transport network, the city and Britain as a whole. London Transport Museum (Covent Garden), included in admission price, February 11-summer 2024

COME STRICTLY DANCE: If you were glued to the latest series of Strictly when it was on TV, catch the Strictly Come Dancing Tour live show. Past contestants including Sara Davies, Max George, Maisie Smith, Tilly Ramsay, Rhys Stephenson, John Whaite and 2021 winner Rose Ayling-Ellis are all taking part. The O2 Arena, from £35, book ahead, February 11-13

MID-TERM: Do you need ways to entertain the children during the school outing? How to ice skate, pretend to be a vet, learn about cats and dogs, view wildlife photos, or take a trip to the real Hundred Acre Wood? We’ve covered all that and more in our guide to things to do in London midterm. February 12-20

BEATRIX POTTER: The V&A apparently houses the largest collection of Beatrix Potter letters and photos in the world, so it’s about time it housed an exhibition about the beloved author and illustrator. Find out how his work as an ecologist and scientist inspired the animal characters we know and love. (And warm up with a tour of London’s Beatrix Potter-related sights.) V&A (South Kensington), £14, book ahead, from February 12

FREUD AND CHINA: Sigmund Freud liked to collect antiques, and among them were a number of pieces from China. This exhibition, launched today, takes a closer look at some of these artifacts and explores how China influenced the Austrian neurologist and vice versa. Freud Museum (Swiss Cottage), included in the entrance to the museum, from February 12

LAST CHANCE: It’s the last weekend of Helen Levitt: In The Street, a retrospective covering 50 years of work by American street photographer Helen Levitt. She has primarily worked in New York, capturing neighborhoods of the city in black and white and color. The Photographer’s Gallery, £5, book ahead, until February 13

BOB MARLEY: Saatchi Gallery has opened an exhibition on the life and work of Jamaican musician Bob Marley. Music, memorabilia, fan art and never-before-seen photos feature, some of which highlight Marley’s ties to London. He’s only here for 10 weeks, so don’t delay. Saatchi Gallery (Chelsea), from £19.80, book ahead, until April 18

VALENTINE’S DAY : It’s only Monday, but Valentine’s Day events in London are in full swing this weekend – and they’re not just for couples. We’ve selected events including comedy and spoken word nights, film screenings and dog walking, which you can enjoy with friends, on a date or alone.

JOHN SIMMONDS: Have you ever heard of John Simmonds? He was a black sailor who served with Nelson at the Battle of Trafalgar, and is today the subject of character encounters at the National Maritime Museum. The family event is a chance to ‘meet’ Simmonds in a traveling performance and learn more about his life. National Maritime Museum (Greenwich), free, just show up, 12 p.m.-3 p.m.

KURDISH MUSIC: Learn the traditional Kurdish rhythm during an afternoon of music and dance workshops. Master the basics, then take part in a social dance party to show off your new skills, accompanied by a live band. Poplar Union, fee / £5, book in advance, 2pm-11pm

WHEELCHAIR BASKETBALL: East London Phoenix are in action against the Loughborough Lightning wheelchair basketball team today. The home side have had a good start this season and want a lot of support for this game. SportsDock (Gallions Reach), £5 (adults), £2.50 (children) + booking fee, book in advance, 5-7 p.m.

ORCHIDS AFTER HOURS: Visit Kew Gardens after day visitors have returned home, for Orchids After Hours. Check out the ongoing Orchids exhibition inside the Princess of Wales Conservatory after dark, with cocktails and street food available, plus performances by Costa Rican artists. Kew Gardens, £18, book ahead, 6pm-10pm

WHITNEY: As of this writing, there are a handful of tickets left to see the Whitney Houston tribute show, Whitney – Queen of the Night. A full cast and live band perform all of his greatest hits while telling his life story. Alexandra Palace, £38.35, book ahead, 6:30 p.m.

CANDLELIGHT CLUB: Dance shoes and rags for Candlelight Club’s Valentine’s Day party, open to everyone whether they’re couples or singles and looking for a good night out with friends. Expect the usual display of 1920s glamour, including Champagne Charlie’s cabaret, a live band, a cocktail bar and a separate rum, absinthe and cigar bar. Central London location, from £25, book ahead, 7 p.m.

VALENTINE’S DAY DOG WALK: They say dogs are man’s best friend, but why shouldn’t they be our Valentine’s date too? Canine charity All Dogs Matter is hosting a fundraising Valentine’s Dog Walk at Hampstead Heath. Take your pooch for a walk and then browse the stalls of the Garden Gate pub. Oh, and there’s a prize for the best-dressed dog, so start sewing. Hampstead Heath, £5 per adult, advance booking, 11am-2pm

CLOTHING AND VINTAGE RECORDS SHOW: Another day of independent shopping in Walthamstow, as a vintage clothing fair and record fair combine. Focus on sustainability rather than fast fashion, while the musical side features rare vinyl finds and new independent labels. Truman’s Social Club (Walthamstow), entry £1, just show up, 11am-5pm

VISIT OF THE PALACE: Have you ever been to Fulham Palace? Get an introduction to the building on this guided history tour and visit the Victorian Chapel, Tudor Great Hall, Georgian Dining Rooms, and other parts of the building and grounds. Fulham Palace, £8/£6, book ahead, 2-3:15 p.m.

ANGLO-ITALIAN MUSIC: The Chamber Ensemble of London perform a concert celebrating Anglo-Italian friendship which was due to take place in Italy last year, until Covid stopped playing. Luckily for us Londoners, it’s happening here instead, with works by Vivaldi and Puccini, as well as newly written pieces. Conway Hall (Holborn) or online, £10-£14, book ahead, 6:30 p.m.-8 p.m.

DATING COMEDY: Rich Mix hosts a comedy show about the world of dating, online dating and the keys to a successful relationship, with a lineup of different comedians. Rich Mix (Shoreditch), £20, book ahead, 7:15 p.m.

SPOTTISWOOD: British-American singer-songwriter Spottiswoode has drawn comparisons to everyone from Leonard Cohen to Nick Cave. He was also called a genius by the New Yorker. Tonight is your chance to see him in this wonderfully intimate setting. Green Note (Camden), £16.50, advance booking, gates 7:30 p.m.

SUPER BOWLS: Tonight, February, is Super Bowl Sunday, when two of America’s top teams in the NFL face off (with an awesome line-up for the halftime show, we might add). Assuming you’re not flying to California to watch in person, here’s a guide to Super Bowl screenings and parties in London. It runs until the early morning, so remember to book the Monday off. From 20h