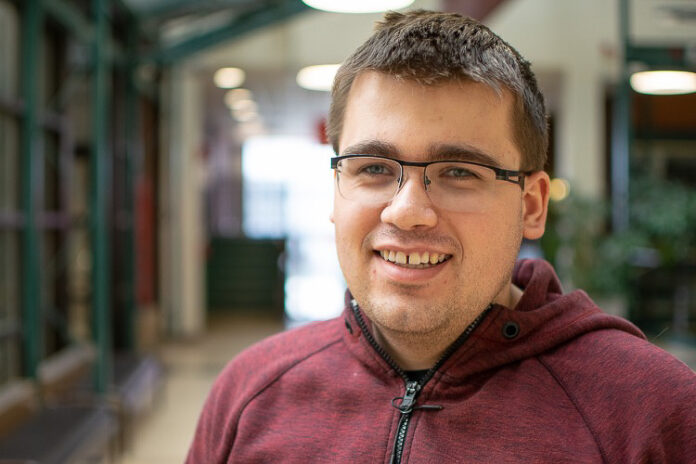 University of Winnipeg student Cameron Adams has made Swamp Cree accessible to everyone with the recent launch of his new language app, nēhinawēwin, with the support of Elders and faculty.

The app contains a dictionary and search function that reveals hundreds of Swampy Cree words and phrases categorized by dozens of topics, from camping and fishing to banking and grocery shopping.

Users can switch app text between Cree Syllabic and Standard Roman spelling, which is the Latinized writing system for Cree.

Adams, 22, and of Ojibway, Swamp Cree and French-Canadian descent, became interested in the language of his ancestors when he began learning his genealogy in grade 6.

“Identity is something that people pick up in pieces… And that [language] is one piece of a puzzle that has maybe 1,500 pieces,” Adams said.

He started teaching himself Swampy Cree, which some speakers call nēhinawēwin, as a hobby after his grandmother gave him a Swampy Cree dictionary.

At the start of her Integrated Bachelor of Education and Bachelor of Arts at the U of W, Adams took introductory Cree classes and met weekly with elder Margaret Osborne, who is also Swampy Cree and an elder. in residence at the U of W.

“He used to come into the office and try to speak Cree, and then I kind of started helping him pronounce words and stuff. I started telling stories in Cree and he was doing the videotape thing,” Osborne recalls.

Beginning work on the app around December 2018, Adams spent more than three years on the project in his spare time before conducting a virtual launch on January 14 on Facebook Live. Osborne helped with the app’s vocabulary and translations.

Using a Google Sheets file, other translators typed in Swampy Cree vocabulary while an editor read the more than 70 sections.

“And they’re not extended yet,” Adams said. “The goal is to grow [the categories of the app] where you have a lot more language in it.

Some sections target demographic groups like children, while others cover topics important to the Native way of life, including fishing, hunting, trapping, animals, berries, and medicine.

“I knew a lot because I had lived this life with my parents,” said Elder Ellen Cook, who is Swampy Cree and recorded the audio translations for the app.

Cook has spoken Cree all his life, spending decades teaching in Manitoba’s public school system and training Cree speakers at the University College of the North in The Pas, Manitoba.

“They had lost a lot of the old vocabulary, like the vocabulary of life off the land,” she said, referring to the Cree speakers she used to teach.

Cook’s son convinced her to work with Adams after seeing her requests for Cree speakers who knew standard Roman spelling.

“I really wanted to leave something behind for my grandchildren and great-grandchildren to learn Cree because a lot of the language was lost,” Cook said.

Adams estimated that Cook spent around 200 hours on the recordings, which he said was a crucial part given the limited number of audible Swampy Cree resources for language learning.

Adams said he hopes to expand the app’s content to make it easier to learn the language independently.

Pictures, games and audible stories are among possible future additions to the app. Adams also plans to add, correct and update vocabulary as if it were “vehicle maintenance”.

Osborne advocated for the app to include all-new vocabulary for technology like phones, TVs and cars, but also said it was important to add language typical of older generations.

Cook said she was sad that a lot of vocabulary and audio didn’t make the final cut, but she looked forward to seeing the app in a more polished form, as well as the app available for Android.

“I want the language to live,” she says.

She recalled from her teaching in Winnipeg’s North End how excited Aboriginal students were every time she taught them about Aboriginal language and culture.

“I hope our young people will find the path of their ancestors with the culture and the language,” Cook said.

Adams intends to complete a Cree language teaching internship, having recently submitted his fifth year certification form. He said he anticipated the app would be handy.

“I will definitely use it in the classroom as a go-to resource,” he said. “Kids can access it on iPad. This will be that resource at home if parents want to teach their children Cree [and] have audio.

Adams said every person deserves the opportunity to learn the language of their ancestors.

“Young people will definitely learn from [the app] and build their language. If they’re serious enough to learn fluently, they’ll learn it fluently,” Osborne said.

“Language is our culture.”

Featured image courtesy of the University of Winnipeg.