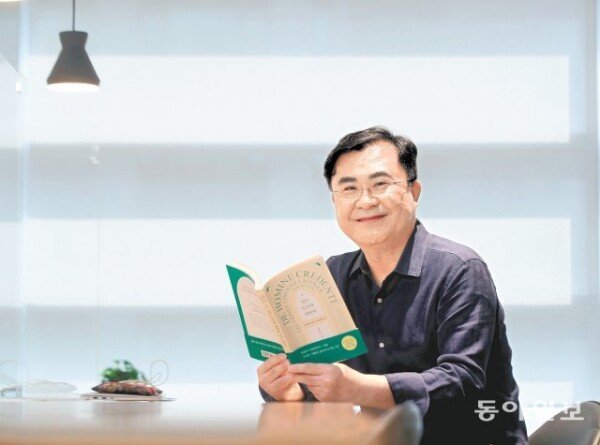 “This book tells my oldest life story,” said Han Dong-il, a lawyer for the Vatican Supreme Court, who on Thursday published a book called “De Homine Credente”, which means “About the Believer.” “In this book I have collected and tried to answer questions about my life which began when I was baptized a Catholic at the age of 15.” His latest bestseller “Lectic Linguae Latinae” or “Latin Language Lecture” encompasses the Latin language and the Greek and Roman cultures, sold more than 350,000 copies in 2017.

As a mass priest in 2010, Han became the first South Korean to be appointed a lawyer for the Rota Romana – the Vatican Supreme Court in Rome. Since last month when he resigned from a priest to become a layman at age 21, he has devoted himself to writing books. He is still referred to as a Rota Romana lawyer although he is no longer a priest. Dong-A Ilbo spoke to Han on Friday in an interview room.

“Religion is like a garden which is a beautiful place but filled only with flowers and trees that its gardener wants to grow. I spent several decades in the garden of the Catholic Church. I hope to allow myself to study whatever interests me in nature from now on, ”Han said. He plans to stop teaching college students and focus only on research and writing activities. What made him become so passionate about learning that he even gave up being a priest? Citing a Jewish tale, he compared learning to the process of finding a musical score or a God-given mission to humans. He explained that it is not an easy job to find your sheet music and that it can be even more difficult to learn which musical instrument to play with the sheet music and how, adding that this is why learning is an endless journey. He pointed out that you can only access your sheet music and instrument when you are working hard to find who you really are by learning.

The new book offers a window into the author’s views on how humans misunderstand God and how religion gives humans a sense of joy and happiness. It focuses more on empathy and love for your neighbors rather than glorifying God. By being blinded by the praise of God, you can cause God to be misunderstood as an entity who easily becomes brooding because he receives less praise than desired. The author’s message is that it is we humans who can make God a divine being or a narrow one.

Touching the hearts of many readers deeply, Han refused to be someone else’s mentor. When asked what attitude he wished them to have in their lifetimes, he replied, “A sandstorm always erases the traces of any path someone has taken before you when you walk in a desert. in Jerusalem. What guides you in the right direction is not a path temporarily drawn on the sand but a star in the sky. When walking through a desert in your life, please do not follow any path someone else has taken, but find your own star.